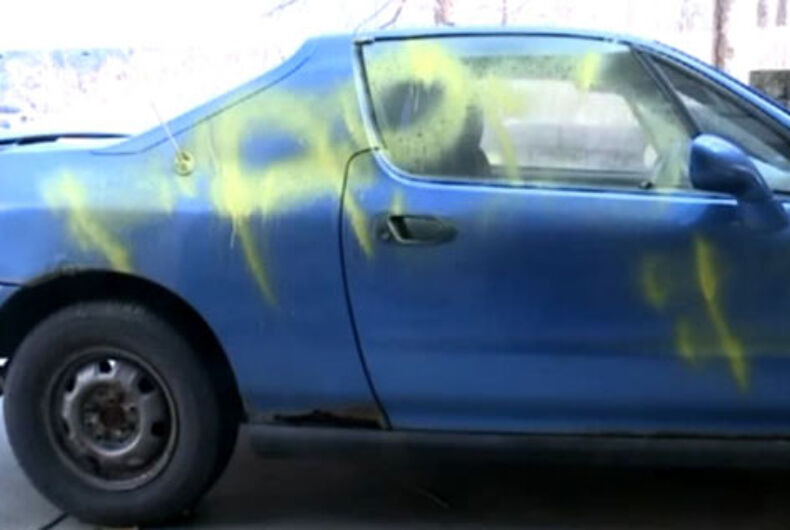 Police in Kansas City, Mo. have very little to go on in the hunt for two antigay vandals who spray-painted slurs all over a gay man’s car, then held a gun to his head and punched him in the face.

The man, identified only as Gyo by reporters out of concern for his safety, was alone at home Saturday night, while his husband was at work. Hearing noises on his carport, Gyo told WDAF-TV he unlocked the door and went outside to investigate what he thought might be a stray animal.

“I took a step outside to turn on the light and next thing that I knew was a gun at my head,” he told the reporter. “It felt super cold against my head.” Just a few feet away, Ozarks First reported, another man was spray-painting slurs all over his car.

Unarmed and caught off-guard, Gyo said he immediately feared for his life.

Overwrought with fear and emotions, Gyo asked his husband, Paul Oldham, to tell what happened next. With the gun to Gyo’s head, one of the suspects punched him in the face, said Oldham.

“He had the gun to his head and the guy punched him in the face. They told him to look away, look away, so he covered his face and went back like this until he heard them running away and then ran back upstairs,” Oldham said. “He called me and was crying, uncontrollably on the phone and said that he had been beat up.”

“One of my biggest fears always has been to be beat up because of homophobia,” Gyo told the station. “That has always been one big struggle.”

The couple says the two criminals left behind a spray can and a red solo cup. Although police haven’t yet determined this was a hate crime — and sexual orientation is a protected class under Missouri law, as of August — Oldham and his husband say they are certain Gyo was targeted because they are gay.