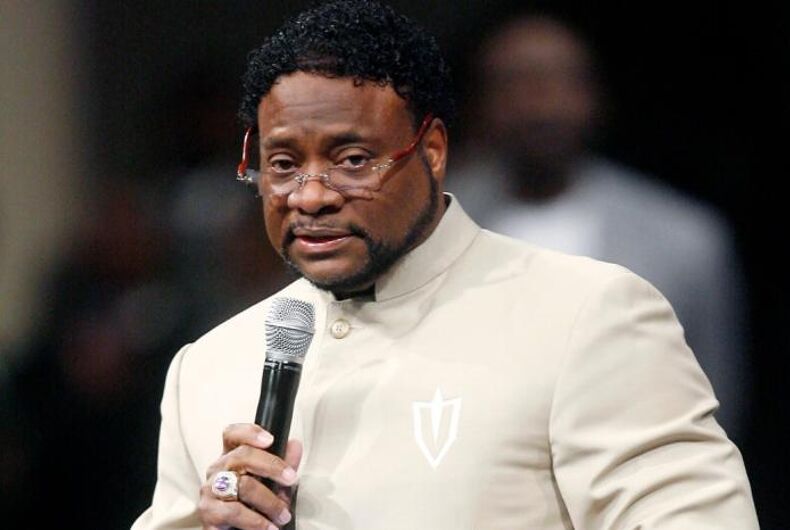 When news hit the airwaves that Bishop Eddie Long died from an unnamed aggressive cancer resulting in dramatic weight lost, many throughout the black church community wondered if his death was due to AIDS, and he was too embarrassed to admit it or seek medical care until it was too late.

“If he had it (HIV/AIDS) where in all of Georgia or the South for that matter could the Bishop had gone for treatment and the news not get out?” Tiffany Jones of Decatur, Georgia told me over the phone.

While Long’s parishioners watched, worried and asked about his weight loss, Long, however, reassuringly attributed the slimming down to a diet of healthy raw vegetables.

“I said to my congregation that I’m going to live to be 100 years old, maybe add a few more years. But you know what, I wasn’t going to get there by stopping by Popeyes,” he stated in an online video posted for his church. “That was my weakness. The biscuits with honey and chicken wangs, spicy, and all of that. Many of us are still eating from a slave menu, you need to check that out.”

Obnoxious Media, based in Atlanta, however, reported in September 2016 that Long “hasn’t preached in months and he’s been told by doctors that he ‘only has months to live’ due to him having HIV/AIDS.”

Called by the Southern Poverty Law Center as “one of the most virulently homophobic black leaders in the religiously based anti-gay movement,” Long’s private life sent seismic shock waves across the black church community when news broke about his alleged sexcapades with four male teenagers while they were enrolled in his ministry for teen boys.

The four young men, all now in their mid-20’s, have been asked their thoughts on the passing of Long.

“As much as we’d like to make a statement about the passing of Bishop Eddie Long, we’ve all decided to remain silent, for now,” the men stated in a joint response given exclusively to the Atlanta Journal-Constitution.

However, their concluding statement said, “Our perspectives will be addressed in our book, Forsaken, which we hope to release soon.”

Long was a flamboyant man and liked to flaunt his gifts. As one of the black church’s prominent pastors of “prosperity gospel,” his bling-bling theology unabashedly flashed not only his Gucci sunglasses, gold necklaces and Rolex watches, but also unapologetically flashed his muscular physique in the latest too tight-fitting spandex workout togs.

Long had been rumored, for some time, to be gay. And for those inside of Long’s stained-glass closet at New Birth Missionary Baptist Church, they, too, knew of the bishop’s penchant for pubescent boys, whom he called “spiritual sons.”

Sadly, however, Long, like too many African-American ministers on the “down low,” had erected his bully pulpit denouncing LGBTQs while using his clerical authority to court and to covet them.

During his infamous anti-marriage equality march in December 2004 titled “Stop the Silence,” with MLK’s daughter, the Rev. Bernice King in tow, Long stated, “In essence, God made Eve to help Adam replenish the earth. Woman has the canal… everything else is an exit. Cloning, homosexuality, and lesbianism are spiritual abortions. Homosexuality is a manifestation of the fallen man.”

King, speculating about her father’s viewpoint on marriage equality, stated at the march that “I know in my sanctified soul that he (MLK) did not take a bullet for same-sex marriage.”

Long’s was not alone — to be gay or rumored to be gay — in denouncing homosexuality. The mess Long found himself in is emblematic of the black church’s down low “politic of silence” concerning sexuality and HIV/AIDS – both in plain sight silently killing the community.

Many African-American men on the DL say there are two salient features that contribute to this subculture — white gay culture and the black church.

Long did not created the homophobic climate in the black church, but he certainly contributed to it.

With a membership of over 25,000, Long’s church is the largest African-American megachurch in the Southeast. As the largest it could have begun, with his sex scandal, to effect change by embracing a liberating, healthy, and holistic understanding of human sexuality.

In so doing, Long would had created a model of pastoral care not only for heterosexuals or homosexuals, but most importantly, for himself.