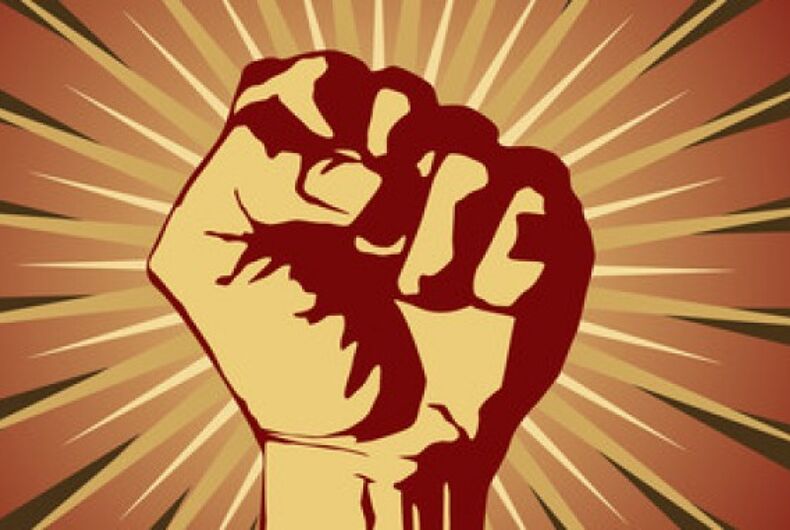 It was a peaceful event, but is drawing criticism from some in the LGBTQ community who believe the community would be better served by keeping it cool for the next four years, essentially hiding under the radar, while Trump and his cabinet are focused on non-LGBTQ issues like repealing Obamacare, reforming taxes and building walls.

To that, Off-Broadway producer Tom D’Angora, says, “Oh, hell no!”. He served as Hillary Clinton’s LGBT Grassroots Outreach Coordinator and believes history is judging our every move.

“The amazing men and women who fought so hard that historic night at Stonewall handed us a baton and not just to twirl and throw in the air, but to run with. Now, more than ever, we need to keep running the race.”

In this exclusive interview with LGBTQ Nation, he explains more.

QN: Why does the LGBTQ community need to band together now more than ever before?

TD: We are at a moment in history when our core values are being threatened. It is our duty to stand up for ourselves and others. We can’t sit around taking selfies and posting photographs of our food and expecting everything to turn out ok. We have to fight and we have to be educated and we have to be loud. I wish I could just go to my theater and stage an elegant dream ballet, but the only thing that matters right now is speaking the truth. I will scream it until we have nothing left to scream about. In the words of Elie Wiesel: “We must always take sides. Neutrality helps the oppressor, never the victim. Silence encourages the tormentor, never the tormented.”

Do you believe Trump when he says the supreme court decided on marriage equality?

I wouldn’t believe Trump if he told me the sky was blue and Cher was fabulous. Everything he says is tainted with misinformation.

Hillary Clinton is a fighter. She backs down from nothing. Tomorrow was supposed to be her inauguration and it was stolen from her. I’m proud of her. I’d never have the strength to do what she is doing.

What are your thoughts on Trump’s relationship with Russia?

Not only should we be concerned; we need to be prepared. We have to understand that anything can happen under a Trump regime. We need to be ready for whatever comes at us and be ready to fight back.

Does the LGBTQ community need to be concerned about Vice President-elect Mike Pence?

Yes! This goes much deeper than wedding cakes. Trump is a mentally ill puppet. Pence is the one who is hateful to his core. We not only have to be concerned about Pence, we have to be concerned with the kind of hateful followers he will spawn. If this were Oz he would be the wicked witch of the mid-west and Glinda would be warning us that he is “far worse than the other one.”

Who in the new cabinet are you most afraid of, in terms of LGBTQ issues?

Rex Tillerson as Secretary of State is dangerous for so many reasons, but as an LGBTQ citizen of the world, I am deeply concerned for our brothers and sisters abroad. There are many countries where being gay is still punishable by death. I was really looking forward to Hillary and her pick for Secretary of State pushing hard for global LGBTQ rights. I’m deeply troubled to think that a man with such strong ties to such an anti LGBTQ country (Russia) is America’s top diplomat.

I don’t care what anyone says, we must all support and vote Democrat down the ticket! This isn’t the time to revolt against your party. This is the time to band together and get like minded people back in charge. Get involved! Donate! Volunteer! Vote!