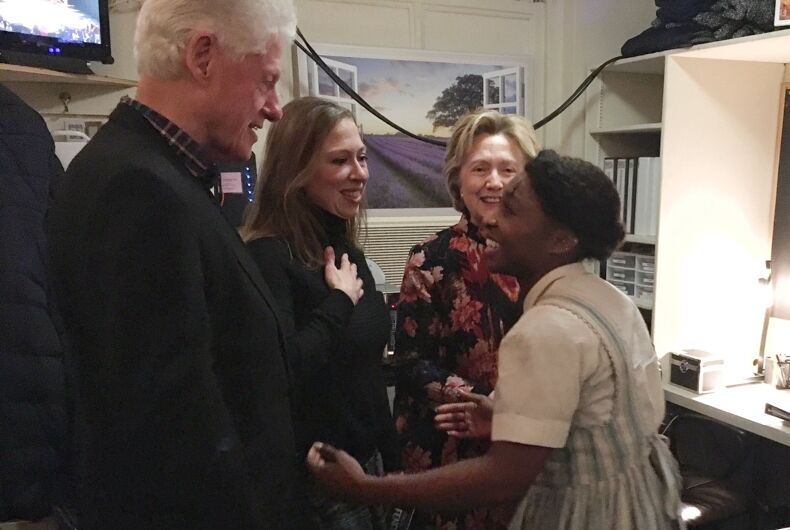 Bill, Hillary, and Chelsea Clinton backstage with the cast of The Color PurplePhoto: Yashar/Twitter

NEW YORK (AP) — “The Color Purple” had a special guest in the audience as it bid farewell to Broadway — Hillary Clinton.

The former presidential candidate and her husband attended the matinee performance Sunday at the Bernard B. Jacobs Theatre, the show’s last after a run of 482 performances. According to theater-goers, the Clinton’s got several rounds of applause.

“The Color Purple” is a stage version of Alice Walker’s Pulitzer Prize-winning novel set in rural Georgia that covers a lifetime of events observed by Celie, a homely, uneducated farm woman whose dreams are repeatedly shattered.

The reaction was in stark contrast to the one that greeted Vice President-elect Mike Pence at “Hamilton” in November. Then, the cast gave him an earful about equality from the stage.

The people's President. Hillary tonight at the final performance of The Color Purple. pic.twitter.com/ph9Ju9uIm2

Exclusive: Hillary, Bill, and Chelsea Clinton backstage at the Color Purple today with the star of the show @CynthiaEriVo pic.twitter.com/PNYG12RYtU