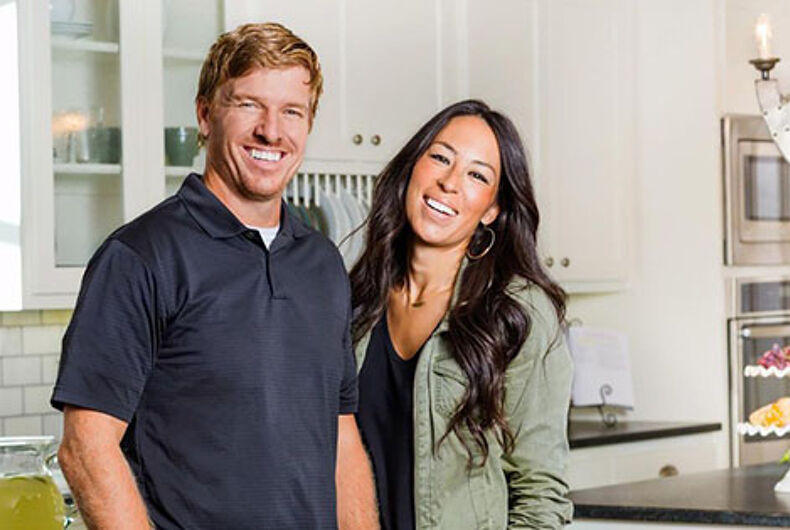 “Fixer Upper” hosts Chip and Joanna Gaines are starting the new year with a message of conciliation and cooperation in response to rumors that, like their pastor, they’re homophobes.

It’s their first public response to a report in BuzzFeed last November that exposed the anti-gay hate of Pastor Jerry Seibert. The couple attend his Antioch Community Church in uber-red Waco, Texas.

The church lists its conservative Christian beliefs on its website. One in particular states:

“Marriage is the uniting of one man and one woman in covenant commitment for a lifetime.”

The BuzzFeed profile was a followup to an interview appearing in Curbed.com, in which Christian author Kate Henderson asked Joanna Gaines how viewers would respond if HGTV booked a gay couple on their program.

“My hope would be, if they are given that situation, they will just love on [the gay couple], but I would imagine that very conservative Christians in the audience might have a problem with that,” she told Henderson.

Seibert took offense to the accusations of being homophobic and agreed to an “exclusive” conversation with notorious bigot, broadcaster and marriage equality opponent Todd Starnes from Fox. Seibert denied he and his church are in any way anti-gay:

“We are not only not anti-gay, but we are pro-helping people in their journey to find out who God is and who He has made them to be.”

“For us – our heart has always been to love Jesus, preach the word of God and help people in their journey.”

Seibert was not questioned about his support for conversion or “reparative” therapy, sometimes called “ex-gay” therapy, which has been outlawed in several states. He also wasn’t asked about the role of women, which is clearly explained in this statement on the church’s website:

“A wife is to submit herself graciously to the servant leadership of her husband even as the church willingly submits to the headship of Christ. She, being in the image of God, as is her husband, and thus equal to him, has the God-given responsibility to respect her husband and to serve as his companion in managing the household and nurturing the next generation.”

Now we have a blog post from Chip Gaines, titled, “New Year’s Revelations,” in which he speaks for Joanna and does not directly address being a homophobe or the fact, as reported by USA Today, that the episode descriptions for “Fixer Upper’s” first three seasons as well as the Nov. 29 Season 4 premiere do not feature an LGBTQ client.

But he does offer respect and cooperation, saying:

Jo and I sometimes don’t see eye to eye on stuff. She looks at something one way and in her gut she thinks she’s right and I look at it an entirely different way. I wish that she could get with the program and just see things the way that I do. (Of course, I’m kidding – we all know Jo’s usually right.)

“If Joanna and I, who are best friends, don’t see lots of things the same way – how on earth do we expect a world of strangers to magically align? The reality is, we may not all get on the same page and I think that’s okay.

“This past year has been tough. In my lifetime, I can’t recall humanity being more divided.

“Plenty of folks are sad and scared and angry and there are sound bites being fed to us that seem fueled by judgement, fear and even hatred. Jo and I refuse to be baited into using our influence in a way that will further harm an already hurting world, this is our home. A house divided cannot stand.

“If there is any hope for all of us to move forward, to heal and to grow – we have got to learn to engage people who are different from us with dignity and with love.

“Joanna and I have personal convictions. One of them is this: we care about you for the simple fact that you are a person, our neighbor on planet earth.

“It’s not about what color your skin is, how much money you have in the bank, your political affiliation, sexual orientation, gender, nationality or faith.

“That’s all fascinating, but it cannot add or take away from the reality that we’re already pulling for you. We are not about to get in the nasty business of throwing stones at each other, don’t ask us to cause we won’t play that way.”

“Jo and I feel called to be bridge builders. We want to help initiate conversations between people that don’t think alike. Listen to me, we do not all have to agree with each other. Disagreement is not the same thing as hate, don’t believe that lie.

“Also, let’s cut each other a little slack. This living out loud thing is not for the faint of heart. Jo and I don’t want to hide, we want to live brave & bold lives and we wish that same thing for you as well. But words can cut deep and having someone misunderstand your intentions can hurt as much as just about anything. If I misjudge people and am wrong, I want to be wrong having assumed the best about them. The bottom line is, I would rather be loving than be right.

“Our family wants to fight for a world that knows how to lovingly disagree. We believe it starts when we operate from a position of love in all things. If your position only extends love to the people who agree with you, we want to respectfully challenge that position. We propose operating with a love so real and true that you are willing to roll up your sleeves and work alongside the very people that are most unlike you. Fear dissolves in close proximity. Our stereotypes and vain imaginations fall away when we labor side by side. This is how a house gets unified.

“Think about it for a minute:  This could be one of the greatest restoration stories of all time.

Will 2017 be the year of ‘religious freedom’ laws?

FDA investigates: Is your e-cigarette going to explode in your mouth?