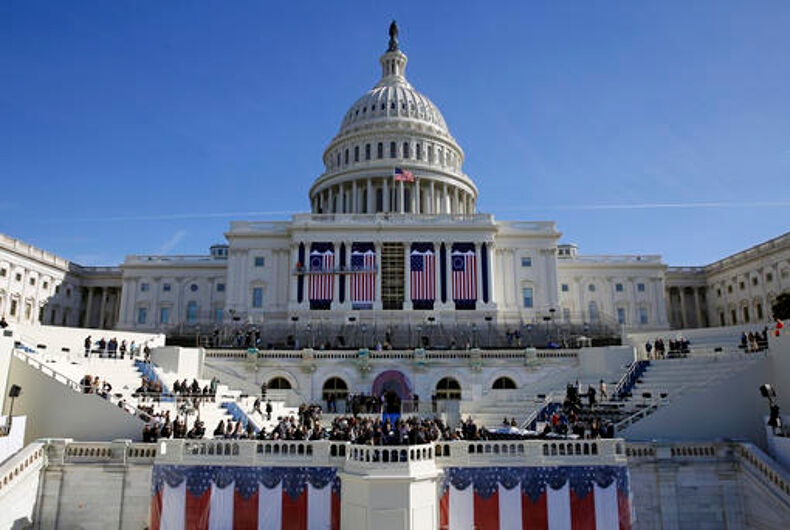 In this Jan. 15, 2016, photo, the U.S. Capitol frames the backdrop over the stage during a rehearsal of President-elect Donald Trump's swearing-in ceremony in Washington. Some two dozen House Democrats plan to boycott Trump’s inauguration on Friday, casting the Republican businessman as a threat to democracy. Photo: (AP Photo/Patrick Semansky)

Reps. Steve Cohen of Tennessee, Jerrold Nadler of New York and Don Beyer of Virginia on Monday joined a growing list of lawmakers who will not attend Trump’s swearing-in at the U.S. Capitol. The number who initially said they would skip the event has increased after Trump lashed out at Rep. John Lewis, D-Ga., on Saturday for challenging his legitimacy to be the next president.

“This president ‘semi-elect’ does not deserve to be president of the United States,” Cohen said in a statement. “He has not exhibited the characteristics or the values that we hold dear. That Dr. (Martin Luther) King held dear. That John Lewis holds dear. And when he questioned the integrity of my friend, colleague and civil rights icon John Lewis, that crossed the Rubicon.”

Cohen said the hope and change associated with President Barack Obama taking office eight years ago have been replaced by “fear and dread.”

Trump and other Republicans have dismissed the boycott and complaints, saying Democrats are sore losers who need to accept the results of the election and move on.

While many Democrats were furious with the outcome of the drawn out 2000 election in which George W. Bush defeated Al Gore after recounts and a Supreme Court ruling, they attended Bush’s inauguration as the nation’s 43rd president.

Obama repeatedly faced questions during the 2008 campaign about the widely debunked claim that he was not a U.S. citizen and that his birth certificate was a fake. Trump, in fact, perpetuated that notion for many years before a brief statement last year that Obama was a citizen. Republicans attended Obama’s two inaugurations.

Nadler, in a statement, said he refuses “to sit idly by as he (Trump) flaunts his illicit behavior without regard for the American people’s interest. I refuse to abide any effort to undermine a free and independent press, which serves a pivotal role in any democratic system and whose rights are guaranteed by our Constitution. I refuse to applaud for a man with a history of offensive and abusive behavior to women and minorities.”

Beyer said he will not be part of the “normalizing or legitimizing” of a man whose election may be the result of “malicious foreign interference of Russian leaders,” a reference to U.S. intelligence’s assessment that Russia meddled in the election to help Trump win.

Lewis said last week that he would not attend Trump’s swearing-in, marking the first time he had skipped an inauguration since joining Congress three decades ago.

“You know, I believe in forgiveness. I believe in trying to work with people. It will be hard. It’s going to be very difficult. I don’t see this president-elect as a legitimate president,” Lewis said in an interview with NBC’s “Meet the Press” that aired Sunday.

“I think the Russians participated in helping this man get elected. And they helped destroy the candidacy of Hillary Clinton,” Lewis said.

That drew angry tweets from Trump who wrote that “rather than falsely complaining about the election results,” Lewis should focus on his congressional district.