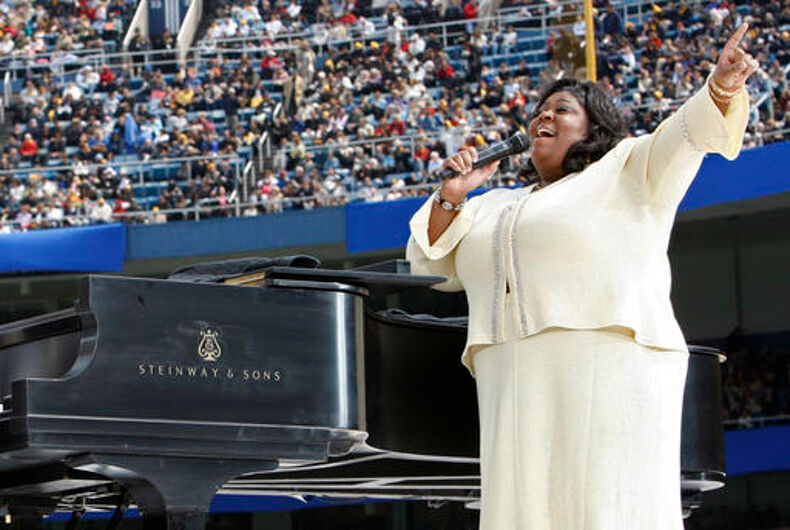 NEW YORK (AP) — Gospel singer Kim Burrell says she makes “no excuses or apologies” for a sermon at a Houston church where she referred to gays and lesbians as perverted.

A tape of Burrell preaching at the Love & Liberty Fellowship Church began circulating online. She said that “the perverted homosexual spirit, and the spirit of delusion and confusion, it has deceived many men and women.” She referred to specific homosexual acts as perverted.

“I came to tell you about sin,” she said. “That sin nature, that perverted homosexual spirit, and the spirit of delusion and confusion, it has deceived many men and women. You as a man, you open your mouth and take a man’s penis in your face, you are perverted. You are a woman and will shake your face in another woman’s breast, you are perverted.”

Meanwhile, Burrell is scheduled to sing a duet with Pharrell next Thursday on the talk show “Ellen,” where host Ellen DeGeneres is one of show business’ most prominent lesbians. They are supposed to sing “I See Victory” from the soundtrack of the new movie Hidden Figures.

There was no immediate reaction from DeGeneres’ show or her social media platform on Saturday.

Pharrell posted on Instagram that “I condemn hate speech of any kind,” although he made no specific reference to his duet partner. “There is no room in this world for any kind of prejudice. My greatest hope is for inclusion and love for all humanity in 2017 and beyond.”

The stars of Hidden Figures were also quick to condemn the singer’s homophobic statements.

Sharing Pharrell’s Instagram post, actress and singer Janelle Monáe, added to his thoughts. “I shouldn’t even have to post this as you guys should already know where I stand but If you do not pls know I unequivocally repudiate ANY AND ALL hateful comments against the LGBTQ community,” she said. “We all belong to the same community, a shared community called humanity. And today and tomorrow and the next day I will continue to stand with other like minded people who condemn any and all statements and actions that would seek to deny the basic humanity of our fellow brothers and sisters.

“We cannot sit Idly by nor will we speak silently when we are confronted with such violence against members of our community. I am personally beyond exhausted by the ignorance and bigotry living in some people. At times I want to punch and I want to slap a lot of people when I read and hear the shit that comes out their mouthes [sic] !!! I will rejoice when folks stop thinking they ARE GOD, Jesus’ assistant, picking and choosing what “sins” are acceptable in the Bible, and using the Bible as a whip! WE can’t afford anymore tearing down of our shared humanity.”

She concluded with a word of advice for her followers, saying, “If your religion is causing you to spew out words of hate, judge, or look down on others because of who one loves then you need to change it. And fast. If the religion don’t make you are more loving or better person, ditch it.”

It wasn’t immediately clear when Burrell gave the sermon. She spoke on Facebook Live Friday about the tape that had circulated, referring to unspecified “enemies” for spreading only a portion of her speech.

She said that she has never discriminated against gays and lesbians. “I love you and God loves you,” she said. “But God hates the sin.”

“We’re not in a war with flesh and blood,” she said. “I came on because I care about God’s creation. And every person from the LGBT and any other kind of thing that is supporting gay, I never said LGBT last night, I said S-I-N. And whatever falls under sin was preached. What was posted isn’t how I preached too, but only that. Isn’t that something. That is the design of the enemy to make it look like I have a personal agenda against people.”

In red states, businesses are gearing up to fight anti-trans bathroom bills