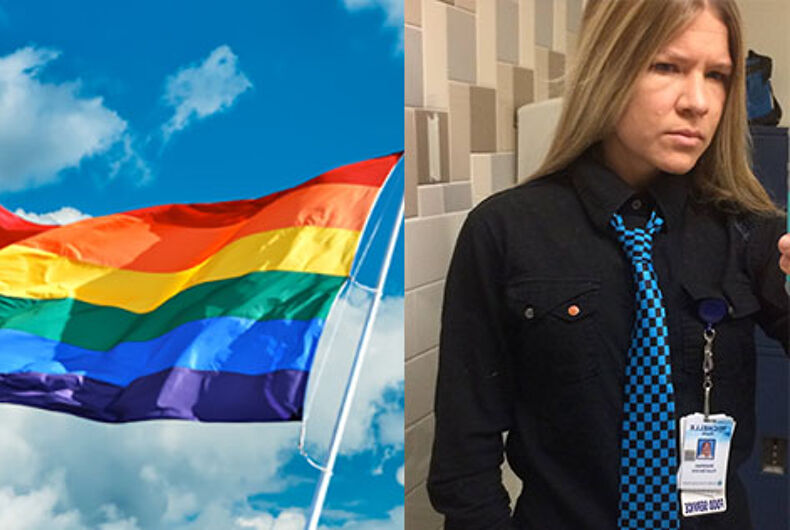 Like many of us, Michelle Hurn of Lafayette, Colorado showed some of her own personality by changing the screensaver on her computer at her job to reflect her life: photos of her dog, her chickens, or from marathons she’s run. But when she changed it to a rainbow Pride flag after the election of Donald Trump, a co-worker at Boulder Community Health’s Foothills Hospital complained.

Hurn said she got a call from her boss insisting that the image be deleted or she would be fired from her job as a clinical dietician. The computer is, after all, the hospital’s property.

“I’m certainly not looking for special treatment or preferential treatment, but to say that a symbol of equality is offensive — I have a real problem with that and I just don’t feel good working for an organization that’s going to stand behind that,” said Hurn, who decided to quit rather than agree to delete the screensaver.

“It’s a symbol to be of equality and, you know, of pride — especially for people who are marginalized,” said Hurn. Before making her decision, she told KMGH-TV she spoke several times with supervisors and human resources staff, all of whom refused to support her position.

“I was very surprised that HR, my boss, the director of our department, they all told me they like me, they think I’m a good dietitian, they think I do great work, but if I’m going to put the symbol back up, then they’re going to start the discipline process and that I was going to be fired,” said Hurn.

Hurn told the Daily Camera that on one of Hurn’s days off, someone deleted the screensaver from the computer.

“I’m going to work every day feeling like I’m a second-class citizen,” she said. “I hope nobody goes through what I’ve gone through this last month and a half.” Last week, Hurn said, she decided enough was enough. “I’m done. I felt like this has to stop.” She gave her employer two weeks’ notice and her last day at work is Monday.

“For me, it was empowering,” Hurn told the She’s 33, married, and been out for nine years. “I don’t do things in life to say, ’Show the haters.’ For me, it was honoring who I am. I’m proud, and I’m not going to pretend I’m not something.”

“We’ve got to stand up any time we see instances of discrimination or people being marginalized,” Hurn said.

And as it turns out, she had no trouble finding a new job.

Hurn is going to work for Light-Life Technology in Erie, Colo. She said that the fact she is gay came up incidentally during her interview and she was pleased to hear there were already other gay workers at the company.

“I’m really excited to work for an organization that is not just OK with that, but wants to embrace it,” Hurn told the Daily Camera. “When you bring in diverse people, you get different ideas.”

Hurn told reporters that she had two reasons for publicizing her resignation. First, she hopes BCH will change its policy that classifies the gay pride flag as an “offensive image.” Hurn said that when she pressed her bosses to explain what made the gay pride flag offensive, Hurn said BCH claimed it supported “diversity through neutrality,” and that the rainbow flag was in violation of that policy.

“That’s the craziest thing I have ever heard,” Hurn said, pointing to a number of Christian images on display at Foothills Hospital. “We’re told to make patients feel supported and foster what their beliefs are. Yet here I am with this small screensaver, and you are forcing me to take it down.”

“I’m writing today to share my personal feelings on the recent media report implying that Boulder Community Health is not supportive of the LGBTQI community and its allies.

“BCH unequivocally supports the right of all employees to be part of a welcoming and safe workplace. We are proud to be a community owned and operated health system that reflects the deeply held values of tolerance and inclusiveness that define Boulder.

“While BCH normally would not comment on specific personnel issues, important inaccuracies in a recent media report compel me to vary from that approach. An employee recently resigned from her position related to use of a shared workplace computer and a dispute with a coworker. The employee who resigned was never threatened with termination by any member of the management team or Human Resources Department at BCH. The employee was offered the opportunity to have formal or informal mediation with her coworker but declined that option and chose to resign.

“The media report also stated that the gay pride flag was on a list of offensive images that are banned at BCH. There is not and never has been such a list. It is BCH practice that communications and images in shared workspaces be neutral. The purpose of this practice is to maintain a workplace that is focused on patient care.  In this specific situation, the employee resigned rather than accept our content neutrality practice.

“Unfortunately, American society is increasingly polarized and we in Boulder are not immune to that divisiveness. I am deeply saddened that this incident has caused members of our community to feel unwelcome at BCH. This is not who we are and does not represent our values.

“We at BCH are proud of and deeply value the diversity and inclusiveness of our workforce, but this incident has made us realize we still have much work to do in order to provide the accepting environment our employees and patients deserve and expect. Over the next two weeks, we will hold a series of employee meetings to specifically discuss issues of workplace equality and our internal culture. These meetings represent an opportunity to reinforce the bedrock values that underlie Boulder Community Health and to listen to our community to facilitate healing and understanding. We will use this moment to move forward together.”