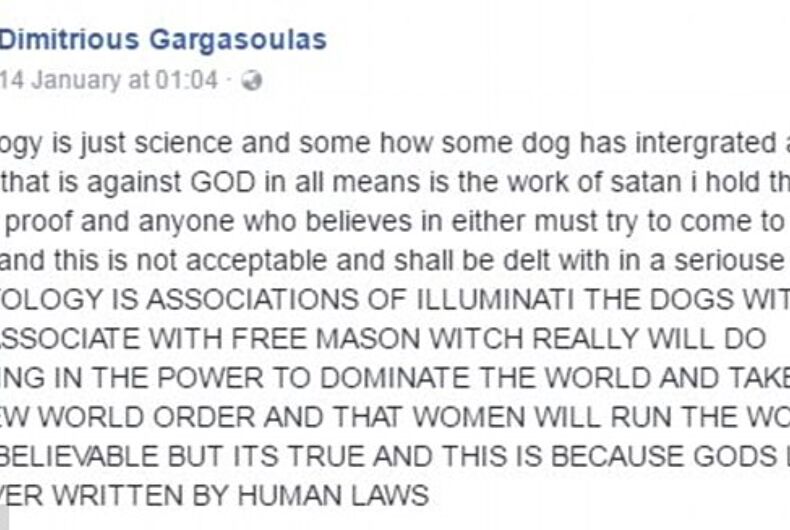 Dmitrious “Jimmy” Gargasoulas, accused of stabbing his gay brother, Angelo, before driving a car through a crowded shopping area in Melbourne and killing five people, made disturbing posts on Facebook that worried his friends in the weeks leading up to the attack.

Gargasoulas claimed he was “god himself in a human bodily form.” On January 9th, 11 days before the attack, Gargasoulas posted, “Today the gods have given me wisdom and knowledge. They have awoken me. I have my answers also vision of a future that is clouded the work of Satan to face me and fail over and over amuses me rather than shake me to the ground.”

Some of his posts were quasi-religious. “Heaven and Hell IS REAL!!! WHO AGREES?”

“I know it’s shock just imagine when I found out I was the choosen one I did not know if I was being played as a fool or not nearly lost the plot but when I realised it was real I came back to adjust and now my powers are warming up also the more that believe the more power I get and I need as many believers as possible because the world has sinned.”

He also posted a homophobic statement, writing, “it is stated in my 10 commandments no homosexual shall rule the earth.”

His friends expressed concern at the change in Gargasoulas’s tone. “Since when did you convert to being a weirdo LMFAO,” commented one.

Another friend posted, “Wtf is up with u bro ! U are not yourself anymore and it’s doing my head in as u are clogging up my news feed with your weird status updates.”

News Corp Australia is also reporting that the ex-boyfriend of Angelo was hit on by Gargasoulas after they accidentally kissed in a nightclub.

Shaun Schembri, 29, said he once accidentally kissed Gargasoulas in a club — thinking he was Angelo — and the accused killer kissed him back.

“One night when we were out at a venue … I leaned over to kiss Angelo, not realising it was Jimmy, and kissed Jimmy. He wanted it to go further, he wanted me to come home with him. I believe there was something there, maybe he was in the closet.”