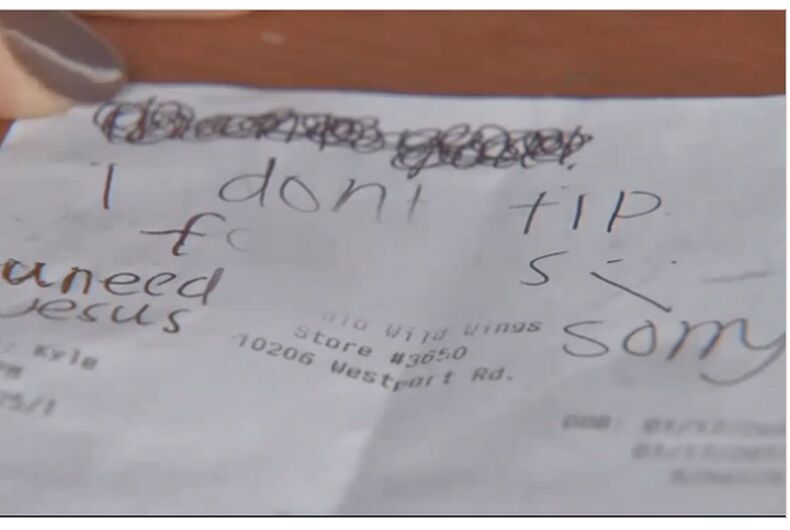 A gay waiter in Kentucky says he received a homophobic slur instead of a tip.Photo: WDRB

If you thought leaving a hateful message in place of a tip was so last year, the trend continues. Apparently, if you give a homophobe a pen and paper, they’ll leave you a nasty note.

A gay server working in Kentucky says he recently received a a homophobic slur in place of a tip, with a side of “come to Jesus.”

Kyle Griffith, who works at a Buffalo Wild Wings in Louisville, told WDRB that he didn’t see the insult coming. His interactions with the two young women were pleasant, so he was shocked to discover they had not only declined to tip — something he relies on to pay his bills — but went out of their way to leave a hateful message.

“To see that coming from someone so much younger than me, just the hate instilled within them, it hurt me very deeply,” Griffith said. “It said ’Sorry I don’t tip faggots,’ and then said ’#UNeedJesus. It just crushed me that someone could say something like that.”

Griffith posted a photo of the receipt — with the customer’s name cropped out — on Facebook and it wasn’t long before it had been shared hundreds of times. However, because someone reported the post as “offensive,” it is now hidden from Griffith’s Facebook page.

“I want to be able to tell everyone that this is not a lie, that this is truth. This is an everyday happening,” he told WDRB. “It’s got to stop. The hate has to stop. There’s no reason for it.”

Even the unnamed culprit, who came across Griffith’s post online, commented on the photo, expressing regret for her actions.

Griffith told WDRB that his management at Buffalo Wild Wings has been supportive, and the chain released a statement on Tuesday emphasizing the importance of creating a welcoming environment for all.

“Because Buffalo Wild Wings is about creating a great guest experience, we feel strongly that our restaurant environment needs to be respectful in order to provide the experience that our guests and team members expect and deserve,” the chain said.

Listen to the station’s interview with Griffith below.
WDRB 41 Louisville News