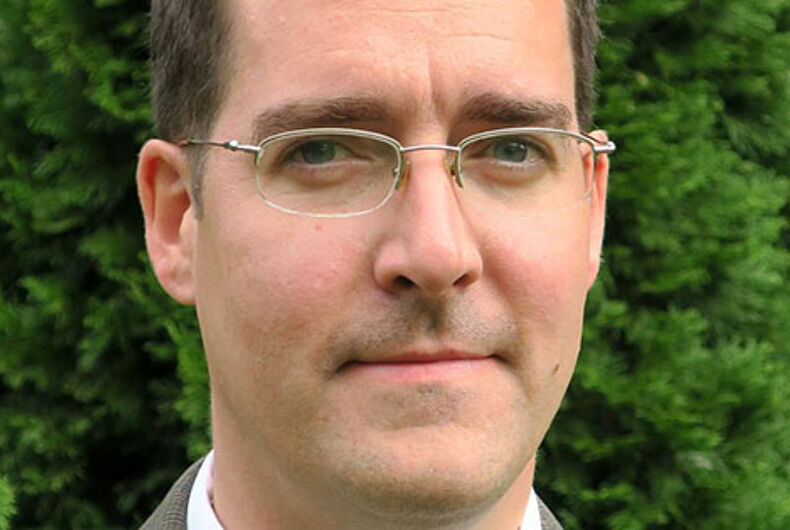 Somewhere in York, Pennsylvania, lives a man with intense hatred, fear, and loathing for transgender Americans. His name is John Ritchie and he works for an organization of anti-LGBTQ Catholics that the Southern Poverty Law Center labeled a virulently anti-LGBT group: the American Society for the Defense of Tradition, Family and Property, also known as TFP.

In 2011, The Public Eye listed the TFP as part of a global network that advocates for “a return to Catholic patriarchal oligarchy. Promotes the historical period of the Spanish Inquisition. Even some Catholic conservatives have written about TFP’s embrace of elements of fascism.”

Ritchie is so actively anti-trans that he included a photograph of him campaigning in favor of North Carolina’s House Bill 2, wearing a placard that read, “Honk Against Transgender Bathroom Tyranny,” in his 2016 diatribe against trans people that is now getting more attention.

Through the TFP — which spent $4.5 million on direct mail, publications and other outreach in 2015, according to IRS records — Ritchie published a video on Friday along with that regurgitated article from July called “10 Reasons Why Transgenderism Is the Family’s Worst Enemy.”

Groups like Catholic Citizens of Illinois on Monday shared his moldy, hate-filled article with followers, which the TFP also posted to its Facebook page.

Among the ten ways the TFP tells its followers they can “debunk transgender ideology and protect the family,” is to cite an inflammatory and widely ridiculed article from the American College of Pediatricians, which claims “the public promotion” of gender identity education, specifically acceptance of transgender individuality, “is child abuse.”

First, the ACP is not the American Academy of Pediatricians but its similar-sounding name has led many parents astray. The ACP exists to denounce abortion and the rights of lesbians, gays, bisexual and transgender children. In contrast, the AAP supports LGBTQ children and reported following a study that children who are supported in their transition lead healthy lives like any other children.

As ThinkProgress and other organizations pointed out when the ACP issued its fallacious argument in August 2016, the anti-LGBT group denied “the reality that some kids are transgender and benefit from being respected in those identities.”

Other claims include the well-worn Christian chestnuts about biological sex, transition regret and suicide, and apparently Ritchie has word from the supreme being herself that being transgender “offends God.”

Ritchie’s duties with TFP focus on a wing of the group called TFP Student Action, which aims its hate at campuses nationwide. Its parent organization has been working since 1973 to stop “the social acceptance of homosexual practice; anti-discrimination laws that give homosexuals a privileged status; the lifting of ‘Don’t Ask, Don’t Tell’ in our military; homosexual adoption; domestic partnerships, civil unions, and same-sex ‘marriage'” and the list goes on to include contraception, abortion and much more.

Watch the video from TFP below, if for no other reason than because the enemies of LGBTQ Americans certainly are.