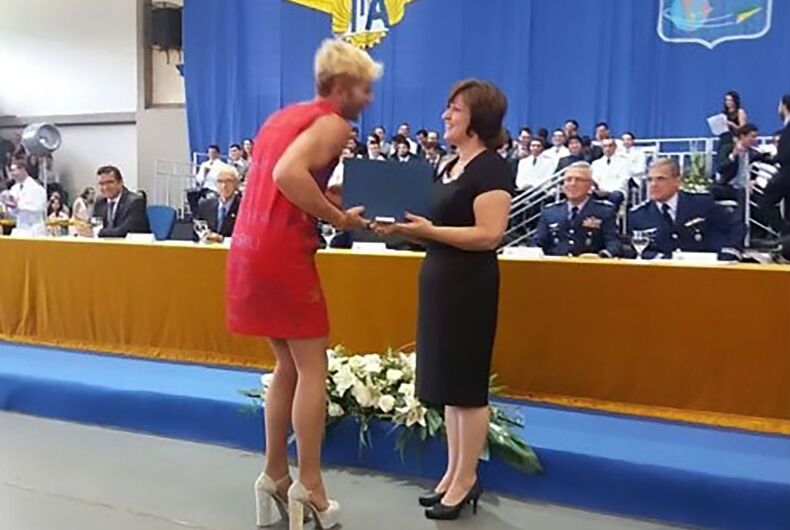 After years of homophobic bullying, openly gay student Talles de Oliveira Faira made a bold statement at his graduation from Brazil’s prestigious and hyper-masculine Aeronautic Technology Institute of the Air Force.

Faira, 24, shared on social media that the environment was a difficult one for him.

“Since I was 12 years old I listened to wonderful things about the Institute,” he said. “I heard that it was the best university in the country and that it could open you several opportunities in the future. The institute was my dream. I did not know that it was going to be the worst deception of my life.”

Faira said the abuse he suffered at the university as an openly gay student came from both staff and his fellow students.

“Since childhood they teach us that being lesbian, gay, bisexual or transsexual is a shame and then we take a lot of time to heal those injuries. They insulted me, they laughed at me and tried to make me invisible.”

Another individual at the school told him, “If I were you I’d kill myself.”

“When I arrived at the institute I decided that it was enough. Either you accept me as I am or you would be exposed for what you really are,” he said.

Faira walked up to receive his diploma after his name was called and yanked off his robe, revealing his outfit.

Watch the powerful moment in the video below.

Franklin Graham: Carrie Fisher & George Michael are in hell unless they repented

Why were LGBTQ Gen Xers so devastated by last year’s celebrity deaths?