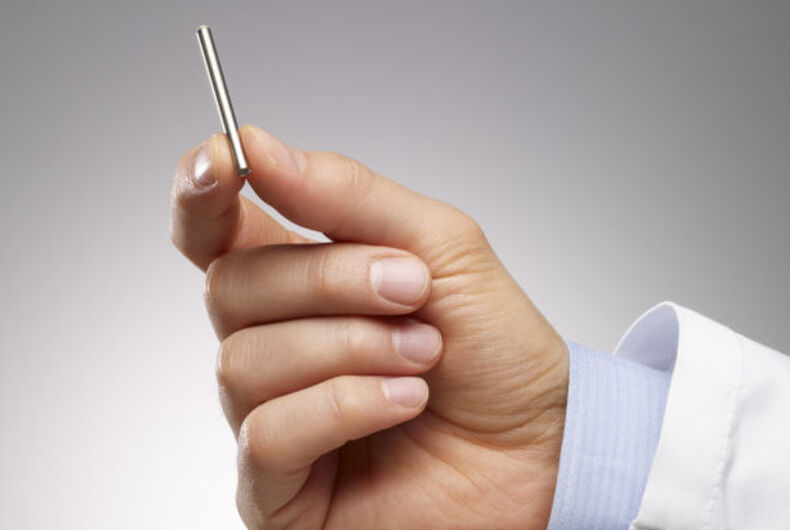 Intarcia Therapeutics, Inc. has announced it has secured $140 million in funding from the Bill and Melinda Gates Foundation to help in the development and advancement of an under-the-skin pump to deliver a daily dose of the HIV prevention drug PrEP.

The company unveiled the device last year, which is intended for use by those with chronic illnesses, including diabetes.

“The relationship with the Gates Foundation will fully leverage Intarcia’s innovative Medici Drug Delivery System by developing the first once- or twice-yearly anti-HIV prophylactic therapy that can fit seamlessly into people’s lives and enable optimal adherence and effectiveness,” the company said in a release. “Adherence is a critical success factor for effective HIV prevention.”

“Over the last five years we have successfully brought to life the vision and promise of our disruptive Medici technology platform, and an expanding pipeline of novel therapeutics,” said Kurt Graves, Chairman, President and CEO of Intarcia Therapeutics, Inc. “With Medici, and each of our new once- or twice-yearly therapies, we’re aiming to solve some of the biggest unmet needs in the treatment and prevention of major chronic diseases that impact millions and millions of lives every day…With our new strategic initiative in HIV prevention, we are also tremendously excited and humbled to work with an incredible organization as smart, forward-looking and purpose-based as the Bill & Melinda Gates Foundation.”

The funds will come in the form of $50 million as a program-related investment, with up to $90 million in non-dilutive milestone-based grants tied to the HIV prophylactic program.

“There’s a vital need for an HIV/AIDS intervention that allows those at risk to incorporate prevention more easily into their daily lives,” Sue Desmond-Hellmann, CEO of the Bill and Melinda Gates Foundation, said. “We feel optimistic about our partnership with Intarcia and the prospect of an implantable prophylactic device that could make a world of difference for people most in need.”

“This is an exciting development in the fight to end HIV and AIDS,” Kelsey Louie, CEO of New York-based GMHC, said, Gay Star News reports.

“At GMHC, we are consistently working to increase access and use of important tools like PrEP and PEP, which in recent years have played key roles in our efforts to end the epidemic by 2020. Prevention is critical to reducing infection rates and we look forward to additional details and progress on this new device.”

“The data we have shows that PrEP is extremely effective at preventing HIV. In studies the success rate varies depending on people’s ability to be adherent to the drugs,” Matthew Hodson, Executive Director of NAM, said. “Technologies, such as the mini-pump or long-term injectables, that make it easier to maintain sufficient levels of the required drugs in the body to prevent transmission are very welcome.”

“For gay and bisexual men who want PrEP but are concerned about their ability to remember to take it regularly, this could be a significant step forward.”

PrEP, while not perfect, has proven to be effective in preventing the spread of HIV when adhered to, but many fail to do so, which makes the pump device useful. PrEP can also be used in conjunction with condoms.

Did you know Coachella’s owner gives loads of cash to anti-LGBT groups?