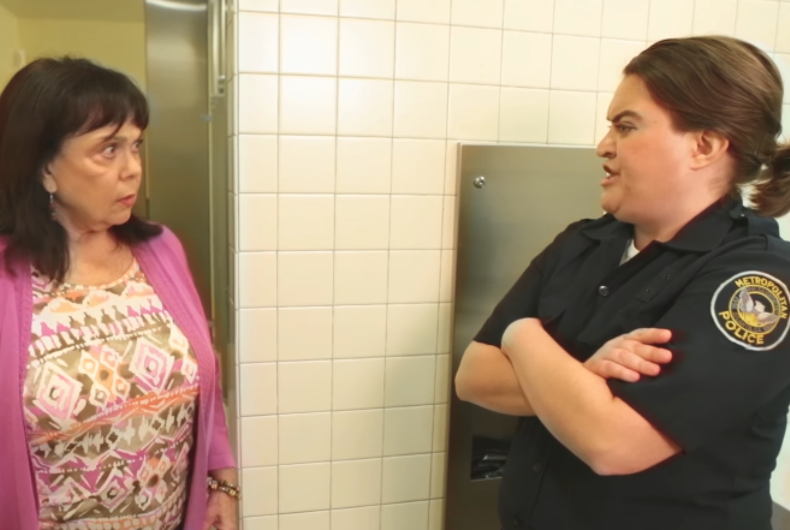 "Bathroom cops" have been a joke up to now. Photo: Funny or Die, YouTube Screenshot

What has been a joke may become reality, if Alabama Republicans get their way.

Sen. Phil Williams has introduced legislation that would require facilities open to people “irrespective of their gender” to employ attendants “stationed at the door of each rest room to monitor the appropriate use of the restroom and answer any questions or concerns posed by users.”

Otherwise “bathroom, or changing facilities that are designed to be used by multiple persons” must be exclusively for “persons of the same gender.”

The bill, SB1, to be called the Alabama Privacy Act should it pass, will be voted on by the Alabama judiciary committee next month, reports AL.com.

Alabama joins seven other states that “have prefiled or introduced legislation that would restrict access to multiuser restrooms, locker rooms, and other sex-segregated facilities on the basis of a definition of sex or gender consistent with sex assigned at birth or ‘biological sex’ in the 2017 legislative session, according to the National Conference of State Legislatures. The other states include, Kentucky, Minnesota, Missouri, South Carolina, Texas, Virginia and Washington.

North Carolina passed a law, with House Bill 2 (HB2), requiring transgender individuals to use bathrooms and locker rooms in government-owned buildings matching the gender on their birth certificate, and allowed private businesses to set their own policies around the issue.

Efforts to repeal HB2 failed in a special session called at the end of 2016, after Charlotte repealed their already nullified (by HB2) non-discrimination ordinance, which gave protections to the LGBTQ community, including trans public accommodations.

The state has been hit with boycotts that have resulted in a loss of millions of dollars in revenue and hundreds of jobs. California’s ban on most taxpayer funded travel to North Carolina went into effect with the first of the new year, as did a ban on travel to Mississippi, Tennessee, and Kansas for their own anti-LGBTQ laws.

The concept of “bathroom cops” has up until now only existed in the world of satire, such as in the below “Funny or Die” video.

Trump’s inauguration will be chock-full of anti-LGBTQ clergy