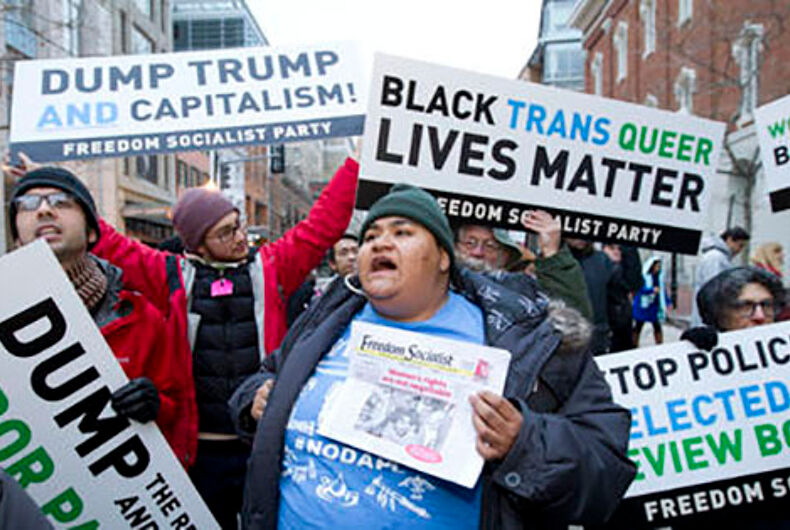 Although there is still plenty of room for attendees on the Capitol grounds where Donald Trump is being sworn-in Friday as the 45th president of the United States, demonstrators by the thousands have descending on Washington, D.C. clogging security checkpoints.

The protesters consist of a wide variety of groups, from Black Lives Matter to feminists to Dakota Access Pipeline demonstrators.

While there have been no violent clashes, as NBC News reported, there is tension. In one incident, Trump supporters trying to make it through a checkpoint near 10th and E streets were forced to make their way through a group of self-described “anarchists.”

The demonstrators locked arms and, apparently by accident, tripped a pro-Trump couple as they tried to pass.

Officers at the checkpoint immediately jumped in to untangled everyone involved. Protesters, however, shouted about the swift involvement of police, yelling, “Don’t touch me” and “Stop! Stop!” Nobody was arrested in that incident, reported NBC.

That’s in sharp contrast to the scene outside one pro-Trump event Thursday night, dubbed the “DeploraBall.” Some demonstrators threw smoke-bombs into the crowd, reported NBC. Someone reportedly used pepper spray as well. Police in riot gear responded to the chaos and blocked an entrance to the event.

Only one arrest was reported: a 34-year-old D.C. man, charged with conspiracy to commit an assault. At press-time police were looking for two others, said to be involved in the melee.

Watch a report from NBC News, below.

Trump has been sworn in as America’s 45th President

Scenes of the Donald Trump inauguration, from supporters to protesters