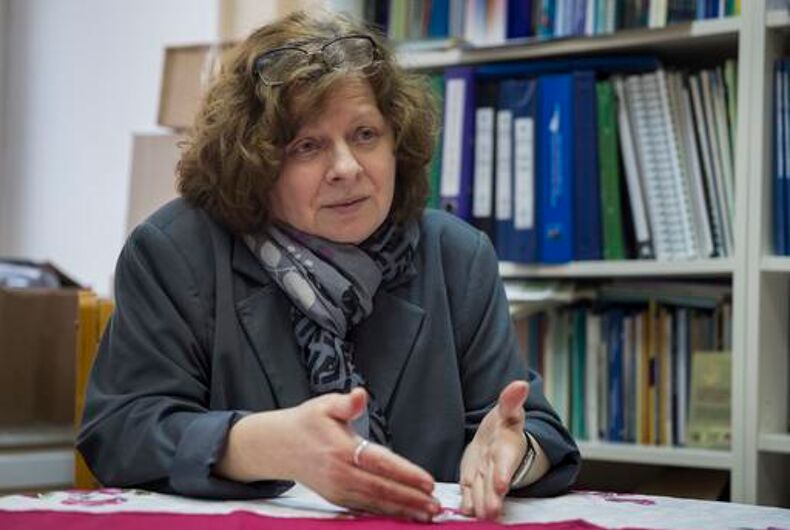 In this photo taken on Wednesday, Jan. 18, 2017, Activist Alyona Popova speaks to the Associated Press at her home in Moscow, Russia. Popova, whose online petition against the bill to decriminalize domestic violence has attracted more than 180,000 signatures, sees the efforts to decriminalize this as a continuation of the Kremlin's increasingly aggressive policy abroad as well as at home after several repressive laws targeting various groups, from foreign-funded NGOs to gay people. Photo: AP Photo/Pavel Golovkin

MOSCOW (AP) — In Russia, giving one’s spouse a slap is nothing extraordinary for many people. This week, the Russian parliament is expected to take a step closer toward decriminalizing it altogether.

Battery is a criminal offense in Russia, but nearly 20 percent of Russians openly say they think it is sometimes OK to hit a spouse or a child. In a bid to accommodate conservative voters, deputies in the lower house of parliament have given initial approval to a bill eliminating criminal liability for domestic violence that stops short of serious bodily harm or rape.

If the measure passes its second reading in the Duma on Wednesday, when the draft can be changed, approval in the third and final reading would be a foregone conclusion. From the Duma, it would proceed to the upper house, largely a rubber-stamp body, and then to President Vladimir Putin’s desk.

The bill stems from a Supreme Court ruling last summer to decriminalize battery that doesn’t inflict bodily harm, but to retain criminal charges for those accused of battery against family members. Conservative activists objected, saying the ruling meant a parent spanking a child could be punished more harshly than a non-relative striking the child.

Ultra-conservative lawmaker Yelena Mizulina, who also authored Russia’s “gay propaganda” ban, then introduced the bill to decriminalize domestic violence. It initially was shelved after a disapproving review from the government.

Tables turned at the end of the year when a journalist from a conservative publication pressed Putin about it at his annual news conference.

“If the father spanks his child for a good reason as a means of education, a traditional Russian one, he will be sentenced to two years in prison — and if a neighbor does this, he will get away with a fine!” the journalist told Putin.

Putin replied that “it’s better not to spank children and refer to some traditions,” but then said, “We should not go overboard with it (punishment for battery). It’s not good, it harms families.”

The Moscow-based Anna Center foundation, which runs Russia’s only domestic violence hotline, received more than 5,000 calls last year. The foundation says many more calls that go unanswered since the line operates only between 7 a.m. and 9 p.m.

The Duma bill “is not going to improve the situation to say the least,” said Irina Matvienko, who runs the hotline.

“Domestic violence is a system which makes it difficult for a woman to seek help,” she said. “It’s not a traditional value. It’s a crime. ”

Calls to the Anna Center hotline show that a lot of Russian women initially don’t even realize that domestic violence is an offense, Matvienko says.

A survey this month by state-run pollster VTsIOM showed that 19 percent of Russians say “it can be acceptable” to hit one’s wife, husband or child “in certain circumstances.” The nationwide poll by phone of 1,800 people was held Jan. 13-15. The survey had a margin of error of 2.5 percentage points.

Russian police are notoriously reluctant to react to domestic violence calls, which many regard as meddling in family affairs. Prosecutors in November began investigating a police officer who took a call from a woman complaining about her boyfriend’s aggressive behavior. Instead of offering help, the officer reportedly told the woman that the police would only come if she got killed. Shortly thereafter, the man beat the woman to death, prosecutors say.

Activist Alyona Popova, whose online petition against the bill has attracted more than 180,000 signatures, sees the efforts to decriminalize domestic violence as a continuation of the Kremlin’s increasingly aggressive policies after several repressive laws targeting various groups, from foreign-funded NGOs to gay people.

“I think it’s part of an overall ideology: aggression and violence are on the rise in society in general since war is everywhere and we’re surrounded by enemies,” Popova said, referring to the state media narrative that portrays Russia as a besieged fortress.

Council of Europe Secretary-General Thorbjorn Jagland earlier this week sent a letter to the speakers of both houses of Russia’s parliament, expressing deep concern at the legislation. Duma speaker Vyacheslav Volodin dismissed the letter as an “unacceptable” attempt to influence parliament.

Olga Batalina, one of the bill’s co-authors, said in the Duma last week that the penalty for battery should be lenient for acts of violence “committed in an emotional conflict, without malice, without grave consequences.”

“Battery doesn’t even involve grave bodily harm. We’re only talking about bruises, scratches, which is bad, too, of course,” Batalina said.

“Has anyone tried going around with a bruise for a week?” deputy Oleg Nilov asked Batalina at the hearing. “Does anyone think it’s OK?”

There haven’t been any significant protests against the bill so far.

Activist Popova is not surprised: discussing domestic violence still is taboo in Russia.

“Society is judgmental,” she said. “It goes like this: you’re a bad woman if you allow this to happen to you, or you’re airing dirty laundry and you’re to blame, or it’s he beats you it means he loves you. And a lot of people don’t want to go public about it.”

© 2017, Associated Press, All Rights Reserved.
This material may not be published, broadcast, rewritten, or redistributed.
News
Domestic Violence, Russia