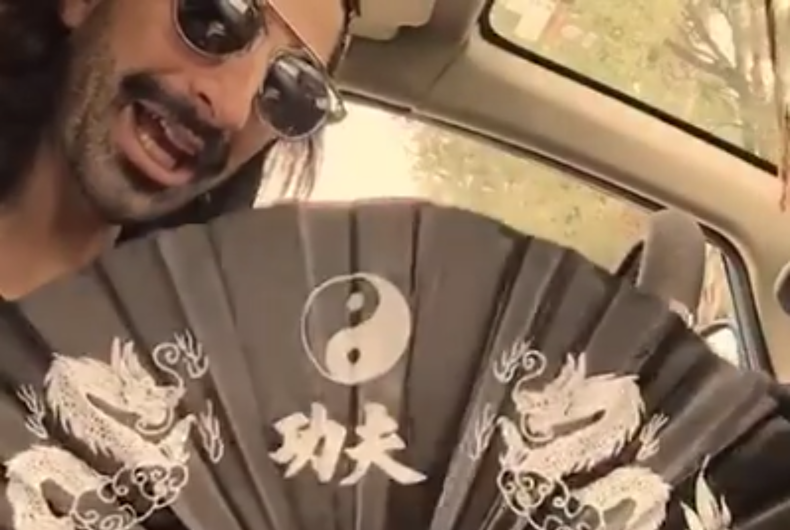 A video of a gay man’s abundant joy as he unwraps his new fan is so fabulous that it is going viral.

Timothy David Marko II posted the video to Facebook on Wednesday and after just two days it has already been watched over 150,000 times.

Watch his unbridled enthusiasm in the video below.

He revealed in a follow up post that he was taken aback by the video’s popularity, which he had been holding off on sharing it.

“But wow. If there is anything I have learned today is to let myself shine. Please don’t hold back from being you. Be your beautiful self. Do your best to not worry about how people perceive you. Because in the end, someone is falling in love with your authentic self,” he advised. “I know I just fell in love with me a little more today.”

He spoke with GayStarNews via email and explained why the fan made him so excited:

I had this fan in my car for years. I used to use it to make people laugh in traffic. Especially if they were upset with my driving and wanted to voice it!

Then I was at my very first music festival with my tribe of friends. It was III Points in Miami and was three days long. I felt so accepted and free to express myself while there.

While at the festival I started to develop a style of dancing that incorporated the fan. It gave me added dance flair and kept me cool during the day, standing out as a totem in a crowd when a friend needed to find the tribe – I’m 6’3″ – and hiding my tears when a band touched my soul!

By the end of the third day the fan and its plastic spokes finally gave in and broke. I was devastated. Since then I have been to many other festivals and again the fan became part of my personality. So I hunted for the right fan.

That’s when I came across this one: stainless steel! The designs were very limited but after careful consideration I found her!