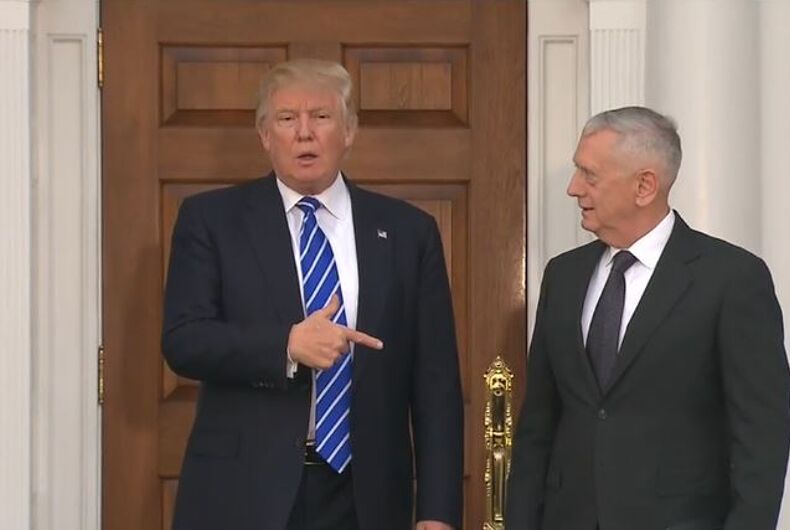 President-elect Donald Trump announced on Thursday that he has selected former general James Mattis to be his secretary of defense, a man who has voice opposition to LGBTQ people openly serving in the military. He has also questioned women serving, claiming they are unsuited for “intimate killing.”

Mattis oversaw military operations in the Middle East and Southwest Asia from 2010 to 2013, before being relieved of his duties by the Obama administration over concerns that he was too hawkish.

In the book Warriors & Citizens: American Views of our Military, which Mattis co-edited a book with Kori N. Schake, a research fellow at Stanford University’s Hoover Institution who served as the McCain, Palin campaign’s senior policy adviser, he argues that the repeal of “Don’t Ask, Don’t Tell” was a mistake.

“We fear that an uninformed public is permitting political leaders to impose an accretion of social conventions that are diminishing the combat power of our military,” Mattis and Schake write in the book, published in August of this year, reports Foreign Policy.

He has also said he believes women are unsuited to the military, saying they are unlikely to do well in intimate killing situations and wonders if male commanders would be willing to send them into such situations, Military.com reports.

Mattis has voiced concern about putting male and female soldiers together in close quarters in the “atavistic” atmosphere of combat as well, saying we cannot put “healthy young men and women together and we expect them to act like little saints.”

Trump voiced his opposition to what he called the “politically correct military” during a campaign stop in Virginia in October when asked about female and transgender soldiers. Trans soldiers have been able to serve openly only since June of this year.

Trump’s pick for national security advisor, Lt. Gen. Michael Flynn, said during his speech at the Republican National Convention that “war is not about bathrooms,” and is also, “not about political correctness or words that are meaningless.”

Trans veteran Kristin Beck has applied for a position in the Trump administration, hoping her presence could bring some “compassion” and “understanding,” but we aren’t holding our breath that she will get a job, given the direction they are going in so far.