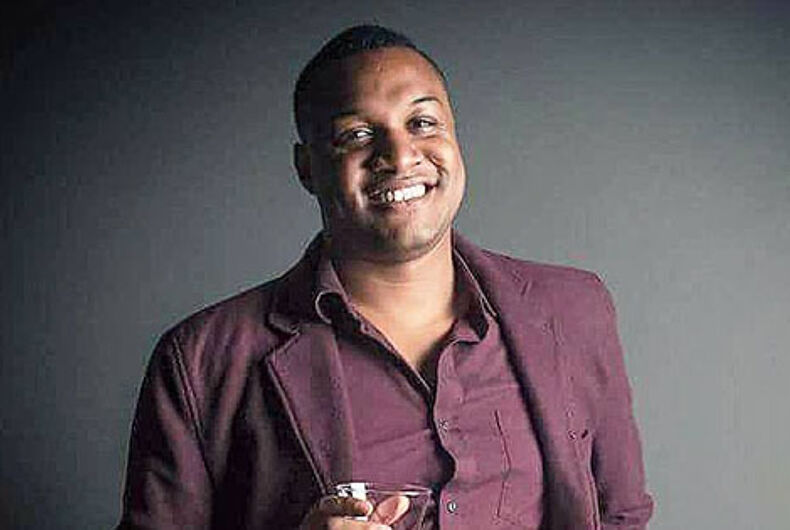 A powerful and personal op-ed in Philadelphia magazine exposes a phenomenon repeated at predominantly-white, progressive LGBTQ-friendly holiday parties across the nation: the sighting of people of color who are invited guests, and yet made to feel as if they are party favors or, worse, the hired help.

“Working the room,” meaning to schmooze and make the rounds from guest to guest isn’t something that feels comfortable, wrote journalist Ernest Owens, 25, when the only other people who look anything like him in that room are literally working the room, by waiting on the guests.

“As the editor of G Philly, Philadelphia magazine’s LGBTQ channel, and one of the few Black gay journalists working in this city, I’ve become accustomed to a routine that rarely varies. I walk into an event and take stock of the sea of whiteness about to embrace me as if I were Tiger Woods at a PGA golf tournament.”

“At a recent fundraising event in Center City, however, the routine finally did vary — in a shocking way. Waiting in a crowded line for my coat-check ticket, I bumped into an elder white philanthropist whom I’ve met at several LGBTQ charity events and socials. As I headed to the main hall, he passed by me and made it a point to jokingly tell me: “I thought you were one of the coat-checkers.”

“My face checked out; I was emotionally paralyzed. I couldn’t believe what I had just heard. How did this white man think that making a racist joke like that in this setting was acceptable? I felt beyond offended — I felt exploited. After having seen me at numerous events, this old white man had the audacity to try to reduce me to something subservient to him.

“In a blink of an eye, I had to reflect on how to respond — if I even should. If I (rightfully) cursed him out, I would be the angry Black man. If I didn’t say anything, I would be allowing him to feel validated in his bigotry.

“So I did a combination of both, whispering directly in his ear: ‘Don’t you go there.’ He backed off, perhaps feeling some guilt as he tried to strike a friendlier tone. But for me, there was no longer anything warm and welcoming in this predominantly white liberal space of LGBTQ donors that in truth was just as segregated as the very hate groups they claim to want to dismantle.”

“I might be perhaps the most successful gay black journalist in Philadelphia,” Owens tells LGBTQNation. “so I get invited to a lot of these events,” meaning LGBTQ charity events and socials. And he says the problem is not generational. “It’s racial, whether it’s young, elderly or middle-aged, it’s just a white liberal thing,” Owens said.

And making it worse has been the reaction from that crowd, the denial, and the defense of themselves. “‘Well, there aren’t any black people interested.’ How do you know that?” Owens asks, rhetorically. “What are your recruitment efforts look like? There are people who try to dismiss my entire experience. These are subtle microaggressions,” which he says amount to efforts to silence him.

On the flip side is the positive response from LGBTQ people of color.