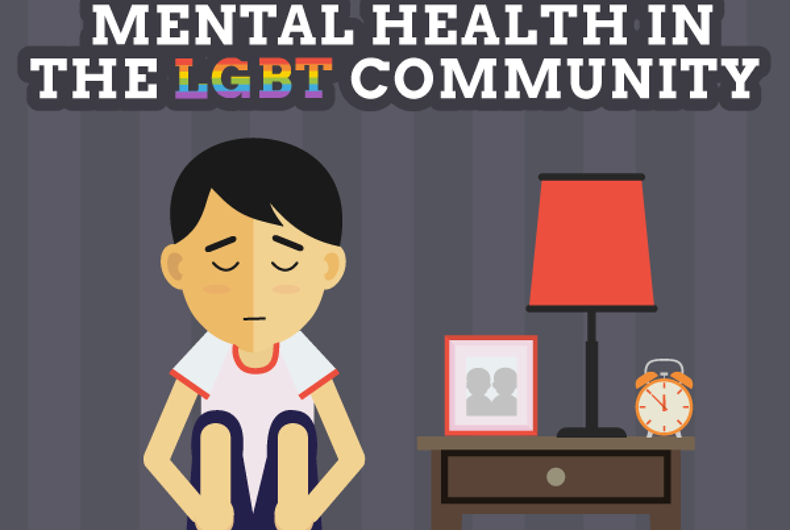 It’s no shocker that it isn’t easy being queer, but a new study shows that bisexual and rural LGBTQ folks face the highest rates of diagnosed depression.

More than 40 percent of bisexuals and 38 percent of rural LGBTQ people say they have been diagnosed with depression, according to a new analysis of data from the Centers for Disease Control and Prevention by MentalHelp.net. These rates are higher than those for gay, lesbian, and transgender folks, and double the rates for straight people.

The lack of visibility may be a factor for both bisexual and rural folks.

“Being unable to construct my own identity because there were no voices I could relate to is probably one of the primary factors for my mental health struggles,” explained a 41-year-old bisexual cisgender woman.

Younger people reported higher rates of depression — nearly half of bisexual 18-24-year-olds said they been diagnosed — which the study’s authors suggested could be due to the incidence of anti-LGBTQ bullying in schools.

Worth noting: because the question asks about depression diagnosis, it may overlook those who are depressed, but undiagnosed. While transgender folks reported slightly lower rates of depression than LGB respondents, a lack of access to healthcare could impact those numbers.

“It was rare to make it to the end of a hallway of people without hearing at least three homophobic or transphobic slurs,” a 22-year-old pansexual transgender woman told the study authors. “A classmate of mine came out of the closet as gay and was harassed regularly to the point of dropping out of high school.”

Still, for many, coming out had a therapeutic effect.

“I think coming out to myself and to (select) others really helped,” said one 54-year-old bisexual cisgender man. “It was like a weight lifted off me – keeping all those contradictions bottled up must have been a tremendous source of stress itself.”

Michigan neighbors fly rainbow flags to drown out the hate

Why Oregon is the number one state for post-election hate