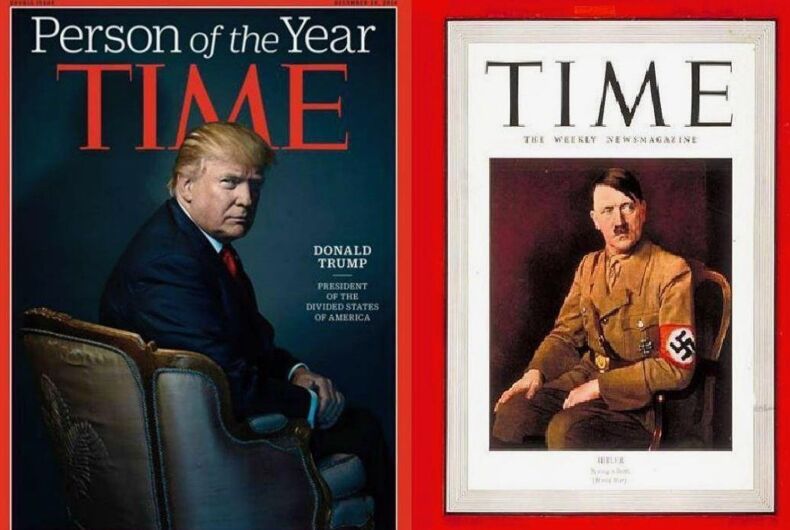 Donald Trump and Adolf Hitler have both now been named Time's Person of the Year.Photo: Time Magazine

Donald Trump has been named Time Magazine‘s “Person of the Year” and for many it is proving salt in the still open wound of the 2016 election.

This lies in the common misunderstanding of what the title means, which is not intended to be an award. It does not equal an endorsement, to borrow Twitter parlance.

“Every year we choose the person of the year, who is the person who has had the most influence on events, for better or worse,” Time managing editor Nancy Gibbs explains. “It’s hard to argue that anyone had more influence than Donald Trump over the events of this year.”

“But there’s a profound argument as to whether his influence was for the better or the worse,” she adds. “And that really is the challenge that faces him.”

It’s hard to measure the scale of his disruption. This real estate baron and casino owner turned reality-TV star and provocateur—never a day spent in public office, never a debt owed to any interest besides his own—now surveys the smoking ruin of a vast political edifice that once housed parties, pundits, donors, pollsters, all those who did not see him coming or take him seriously. Out of this reckoning, Trump is poised to preside, for better or worse,” Gibbs writes.

“For reminding America that demagoguery feeds on despair and that truth is only as powerful as the trust in those who speak it, for empowering a hidden electorate by mainstreaming its furies and live-streaming its fears, and for framing tomorrow’s political culture by demolishing yesterday’s, Donald Trump is TIME’s 2016 Person of the Year,” she concludes. That’s not exactly a glowing statement on our soon-to-be leader.

Previous individuals named Time‘s Person of the Year include: Adolf Hitler, Ayatollah Khomeini, Vladimir Putin and Joseph Stalin, who was twice chosen, showing they mean it when they say for better or worse.

President Obama was named Person of the Year in 2012 after winning reelection.

Trump took a jab at the magazine in 2013, predicting it would soon be dead after stating his disapproval with their list of most influential people. As you might have guessed, Trump was not on that list.

Kelly Osbourne tells LGBT youth to give Trump a chance