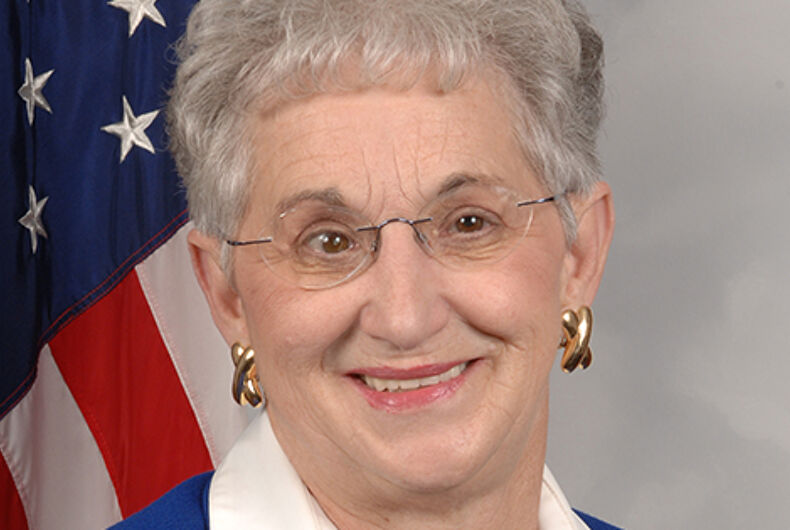 Republican Rep. Virginia Foxx is set to take over leadership of the House Education Committee of the incoming Congress and her history is worrying for those wishing to see Obama’s education policies survive and because of comments she made regarding Matthew Shepard’s death.

Foxx once claimed the idea that Matthew Shepard’s death was motivated by hatred over his sexual orientation was a “hoax” while arguing against the Matthew Shepard and James Byrd, Jr. Hate Crimes Prevention Act. She instead credited robbery as the motive behind the 1998 murder of the University of Wyoming student, whose 40th birthday would have been Thursday.

While she called the murder a “very unfortunate incident” she said the homophobia motive was “a hoax that continues to be used as an excuse for passing hate crimes bills.”

She later walked back that statement, claiming the word “hoax” was a poor choice and saying, “Mr. Shepard’s death was nothing less than a tragedy, and those responsible for his death certainly deserved the punishment they received.”

The legislation passed and was signed into law by President Obama in 2009.

Foxx will now take on Obama’s education legacy, looking at least somewhat favorably on president-elect Donald Trump’s call to do away with the Department of Education.

“I definitely see the opportunity to see the department scaled back,” she told Inside Higher Ed. “We need to talk about those things. But we need to look at the functions of the Education Department and see are there things that can be done at the state and local level that are now being done at the federal level. I think you’re going to see that happening all across the board in this Congress, in the upcoming Congress, and in this administration. I’m very hopeful that we will see an emphasis put on that.”

In that same interview she objected to Obama’s handling of fighting the abuses of for-profit colleges.

“They could have put the schools on notice, they could have helped them stay in business until the students were transferred out into alternative situations,” she said. “But there seems to be absolutely no concern for students — none, zero — just vindictiveness on the part of the administration for the for-profit schools. I’m appalled at what they did to the students involved in those cases.”

Foxx also said “Republicans will do everything they can to roll back” regulations that target the industry.

The for-profit colleges expect that life will be easier for them under a President Trump, who recently settled a fraud suit for $25 million over his now defunct real estate seminar Trump University.

“She says she will do everything possible to expunge most of Obama’s education legacy. She is a strong supporter of school choice as President-elect Donald Trump rolls out his $20 billion school choice plan emphasizing vouchers — and she expects to have an ally in Trump’s pick for education secretary, Betsy DeVos,” reports Politico.

Devos has also given the LGBTQ community reason to worry, as she headed the effort to amend Michigan’s constitution to ban same-sex marriage, along with her husband Richard, Raw Story reports. The couple gave $200,000 to the campaign.