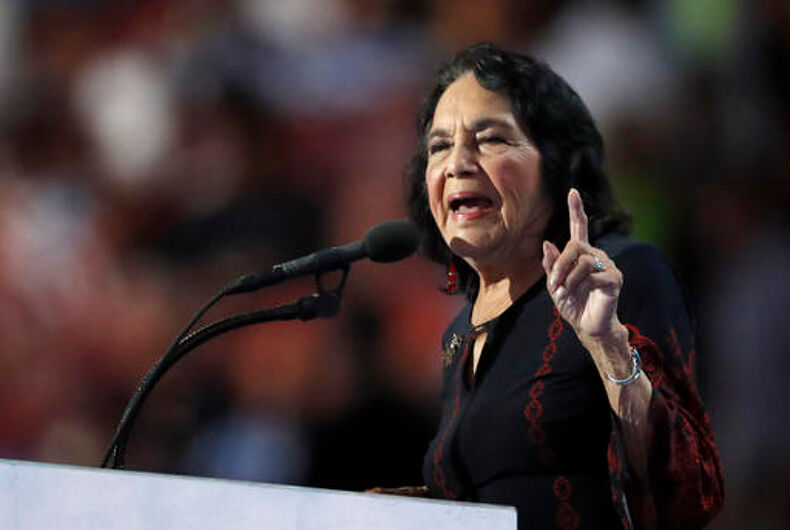 FILE - In this July 28, 2016 file photo, civil rights leader Dolores Huerta speaks during the final day of the Democratic National Convention in Philadelphia. As the election of Donald Trump sets in, some dispirited black and Latino liberal activists are looking to veterans of the Civil Rights Movements on how to respond to strong disappointment amid uncertainty over voting rights, immigration reform and police shootings.Photo: (AP Photo/Paul Sancya, file)

ALBUQUERQUE, N.M. (AP) — It became clear to Javier Benavidez that Donald Trump would win the presidency around 2 a.m. after polls closed on Election Day. The Albuquerque activist had helped organize two anti-Trump protests in New Mexico and strongly opposed the Republican’s views on immigration.

He went to bed around 4 a.m. and expected to be depressed for days. Instead, Benavidez began thinking of the civil rights leaders of the 1950s and 1960s and the hardships they faced, from police dogs and water hoses to assassinations and government spying.

If they could continue to fight in the climate of those times, he thought, today’s generation of liberal advocates could get through uneasiness over the election results.

“Honestly, I got energized,” Benavidez said. “It was like a religious experience.”

As Trump’s election sets in, some dispirited black and Latino liberal activists are looking to — and finding inspiration from — the veterans of civil rights movements on how to respond to strong disappointment amid uncertainty over voting rights, immigration reform and police shootings.

They say they, too, felt hopeless at times, such as the 1968 assassination of Democratic presidential candidate Robert Kennedy and Richard Nixon’s election, but eventually, they kept fighting.

“We had no other choice,” said Dolores Huerta, who founded the United Farm Workers union with Cesar Chavez and was on stage with Kennedy — the brother of President John F. Kennedy — in Los Angeles before his assassination. “The only thing we can do is keep on organizing.”

Since Trump’s election, Huerta said, she’s been telling young, discouraged advocates that they still are needed for grassroots organizing. She reminds them of her own political disappointments in the 1960s that even saw the federal government spying on the advocacy group.

“But out of that chaos … a lot of new organizations and movements were built,” Huerta said, pointing to the Chicano and gay rights movements.

Nine days after Election Day, Ingrid Anderson was headed to security at Hartsfield-Jackson International Airport in Atlanta when she passed her congressman, civil rights icon John Lewis, getting a shoeshine. At first she was reluctant to bother him but decided to say hello.

Moments later, she was in his arms, weeping.

“I said thank you for everything you do, and I just started crying,” said Anderson, a 39-year-old white woman who works as a physical therapist. “He actually got up and stepped down off the platform and gave me a hug.”

Anderson said she walked away from the exchange with a renewed feeling of hope after more than a week of feeling paralyzed and emotionally raw.

“I have felt very alone and isolated, not knowing what to do,” she said. “Having someone who has been through the most hideous of injustices and made such progress to look at this and say ‘You can’t stop fighting, keep the faith’ … It inspired me.”

Ambassador Andrew Young, who also worked alongside Dr. Martin Luther King during the 1960s, said the election has prompted a lot of soul searching among citizens. Experience, he said, has taught him that the country’s strong enough to hold together.

“We are doing better as a result of our movement,” Young said. “I’m always looking for hope. When I was getting kicked around, it never occurred to me that I’d end up a congressman, ambassador, mayor.”

Maria Varela, a Mexican-American member of the Student Nonviolent Coordinating Committee, remembers being heartbroken after a group of black and white Democrats from Mississippi failed to convince the party officials to seat them at the 1964 Democratic National Convention. Officials wanted to seat an all-white, segregationist delegation.

Varela, a photographer, thought the activists were near a major breakthrough before being blocked. “We thought we failed … a lot of us lost hope,” Varela said. “It’s taken me a number of decades to get a good perspective.”

But then she and other civil right workers decided to develop “alternative systems” like nonprofits and institutions. That’s the message she’s telling young activists.

“The Trump election is going to unite progressives in a different kind of way,” Varela said. “Just wait.”

‘Taken 4’: Coming soon to a legislative session near you