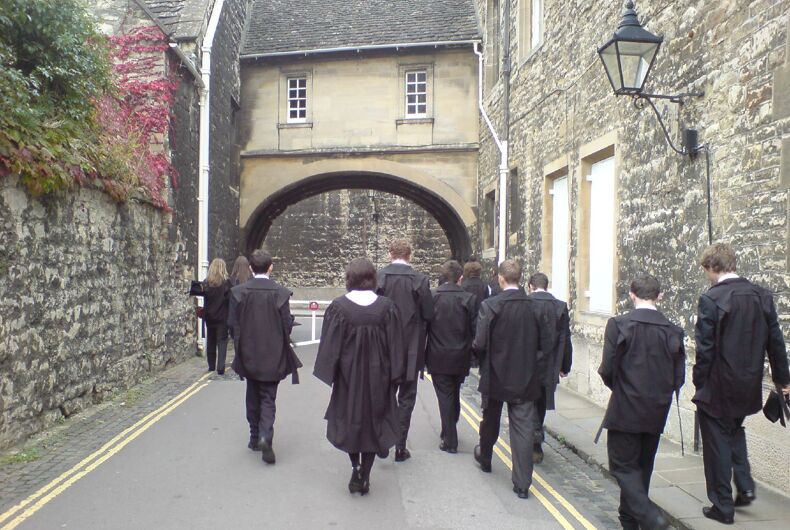 Oxford University has instructed it students to use the gender neutral pronoun “ze” in place of “he” and “she” in order to be more inclusive to the transgender community.

The declaration came in the form of a leaflet distributed by the student union, reports The Sunday Times.

While LGBTQ rights campaigner Peter Tatchell told the publication that “giving people the ‘ze’ option is a thoughtful, considerate move,” he added that it should not be compulsory.

“This isn’t about being PC,” he added of the move by the school. “It’s about respecting people’s rights to define themselves as neither male nor female.”

“Events start with a speaker introducing themselves using a gender neutral pronoun. It’s part of a drive to make the union intersectional,” said Sophie Buck, welfare officer at the student union.

Intentionally misgendering a trans person is an offense under the university’s code of behavior.

Trans journalist Ashlee Kelly told GayStarNews that the policy might not be as trans-friendly as it is intended.

“What about trans men and women that go through a hell of a lot – physically and mentally – to be recognized as our gender?” she said. “Like, if people really want to use a gender neutral pronoun for themselves then that’s fine, but I’ve put so much effort into my transition that I find it ridiculous that this can just be thrown to one side because of the ‘feels’ of others.”

“You wanna use gender neutral pronouns on yourself? That’s fine, but don’t expect me to use them to describe myself, or be cool when others refer to me as such. I’m a ‘she,’ not a ‘they,’ ‘zie,’ ‘bun’ or whatever!”

Cambridge University is beginning to follow suit, The Times reported.

UPDATE: Oxford University’s student union has said they did not instruct students to use the pronoun “ze” instead of “he” and “she.”

“As far as we’re aware, the information which has been published is incorrect. We have not produced a leaflet implying that all students must use ‘ze’ pronouns to refer to others, or indeed to themselves,” they said on their website.

“We would also like to clearly state that we would never tell anyone to use ‘ze’ pronouns instead of ‘he’ or ‘she’ if ‘he’ or ‘she’ is the pronoun someone wishes to use. That would be misgendering and would likely have the biggest impact on individuals who may already be struggling to get people to use ‘he’ or ‘she’ for them. It would be totally counterproductive,” they added.