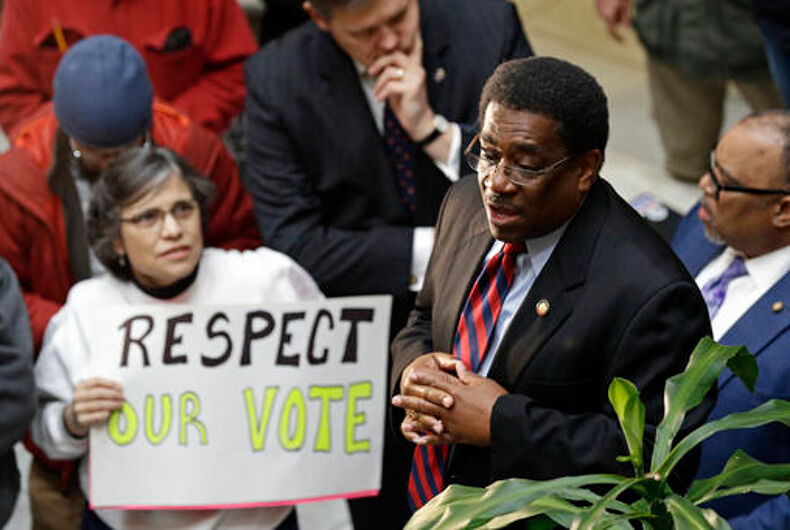 Rep. Garland Pierce, D-Scotland, addresses protestors during a special session at the North Carolina Legislature in Raleigh, N.C., Thursday, Dec. 15, 2016. Lawmakers finalized a $201 million hurricane and wildfire relief package Wednesday, sought by Gov. Pat McCrory in a special session he called. But they didn't go home as fellow Republicans then called their own session to weigh legislation, some of which could threaten the incoming Democratic governor.Photo: (AP Photo/Gerry Broome)

“It appears the sole purpose is to undercut the power and authority of Gov.-elect Roy Cooper before he takes the oath of office,” said Sen. Floyd McKissick, a Democrat representing Durham.

GOP lawmakers sought to scale back the team Cooper can bring into office, require their approval for top administrators at state agencies and erase the governor’s ability to shape elections boards statewide, which under current law would become controlled by Democrats in 2017.

On a day when hundreds protested, at least 16 arrests were reported when Speaker Tim Moore ordered the gallery cleared. Those arrested were led away in plastic handcuffs, with supporters in the nearby rotunda chanting, “this is what democracy looks like.”

Any notion Cooper would get a honeymoon period with the legislature was swiftly dashed this week. Lawmakers began the surprise session Wednesday within minutes of adjourning another special session called by McCrory to approve a disaster relief package.

The General Assembly has veto-proof GOP majorities in both House and Senate, meaning Cooper will be hamstrung to push any agenda without some Republican support.

Bills that cleared one chamber of the legislature by party lines by Thursday evening would reduce the number of political appointees that Cooper could make to shape his policies. Less than four years ago, lawmakers gave McCrory the power to hire hundreds of additional at-will workers.

Legislation also would require Cooper to send his choices for Cabinet secretaries to the Senate for confirmation. The state Constitution allows the Senate to confirm a governor’s appointments, but that power largely hasn’t been used for at least decades.

“This bill is a good step forward in reasserting legislative authority vested by the constitution and entrusted to the members of this body,” said Rep. David Lewis, R-Harnett, on the House floor.

“Things are happening because you can do it, not because you should do it,” said 86-year-old Rep. Mickey Michaux, D-Durham, the longest-serving House member.

Throngs of protesters rallied inside the Legislative Building, chanting and disturbing both House and Senate galleries. General Assembly Police Chief Martin Brock said the 16 arrested would be charged with two misdemeanors, including trespassing.

Protesters led by the state NAACP chapter loudly demanded that Republicans accept the will of the voters from last month’s election and leave Cooper’s authority alone.

“I believe fervently in democracy. I’m watching it be undermined right beneath by people who seem unwilling to consider or to listen,” said one 71-year-old protester Margaret Toman, speaking earlier in the day.

Any legislation likely to pass Friday would go to McCrory, whose signature is required for it to become law. McCrory has not commented publicly on the legislation or how he might act.

Cooper said Thursday he will fight any bill he considers unconstitutional and perhaps even sue to prevent it taking effect.

“If I believe that laws passed by the legislature hurt working families and are unconstitutional, they will see me in court,” Cooper told reporters.

Republicans flexing their muscle against Cooper have recalled past sessions of the General Assembly, when it was dominated by Democrats. Democrats stripped the powers of the first and only GOP lieutenant governor of the 20th Century in the late 1980s. But Democrats said there’s been no such widespread effort to limit the power of an incoming executive before he took office.

Republican legislation also would erase Cooper’s ability to appoint a Democratic majority on the five-member State Board of Elections. A new, eight-member state board would be evenly divided between Democrats and Republicans, with legislators choosing half the members.