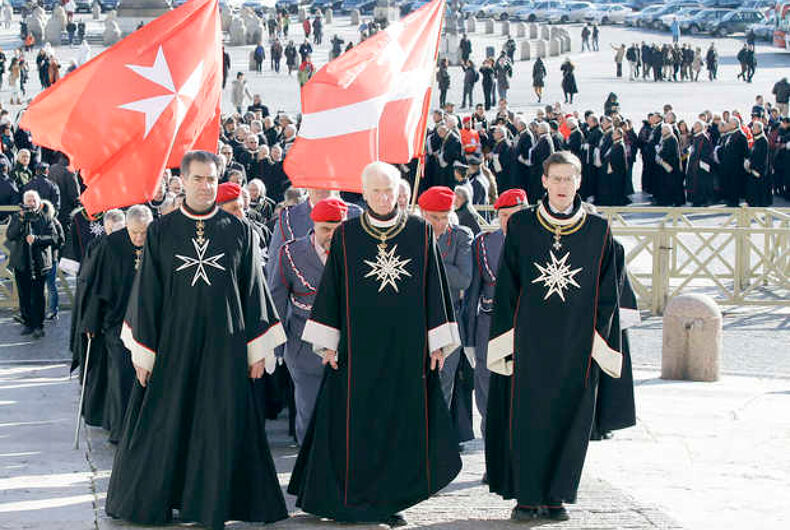 Members of the Knights of Malta walk in procession towards St. Peter's Basilica during a celebration to mark the 900th anniversary of the Order of the Knights of Malta, at the Vatican. The order traces its history to the 11th century with the establishment of an infirmary in Jerusalem that cared for people of all faiths making pilgrimages to the Holy Land. It is the last of the great lay chivalrous military orders like the Knights Templars that combined religious fervor with fierce military might to protect and expand Christendom from Islam's advance during the Crusades. In February 1113, Pope Paschal II issued a papal bull recognizing the order as independent from bishops or secular authorities, reason for Saturday's anniversary celebrations at the Vatican.Photo: Associated Press

VATICAN CITY (AP) — Pope Francis has named a high-powered commission of inquiry to investigate a scandal involving the former grand chancellor of the Order of Malta, the Catholic religious order that dates from the medieval Crusades.

Albrecht von Boeselager was forcibly removed as grand chancellor this month after the Order of Malta said “an extremely grave and untenable situation” came to light. The order hasn’t provided details, but said the scandal involved von Boeselager’s tenure as the order’s health minister and said he had concealed the problems until an internal investigation uncovered them last year.

The pope named a top Jesuit church lawyer, the Vatican’s former U.N. ambassador to Geneva and senior Order of Malta members to “quickly inform the Holy See” about the scandal.

© 2016, Associated Press, All Rights Reserved.
This material may not be published, broadcast, rewritten, or redistributed.
Health and Wellness
Catholic Church, Order of Malta, Pope Francis, Scandal