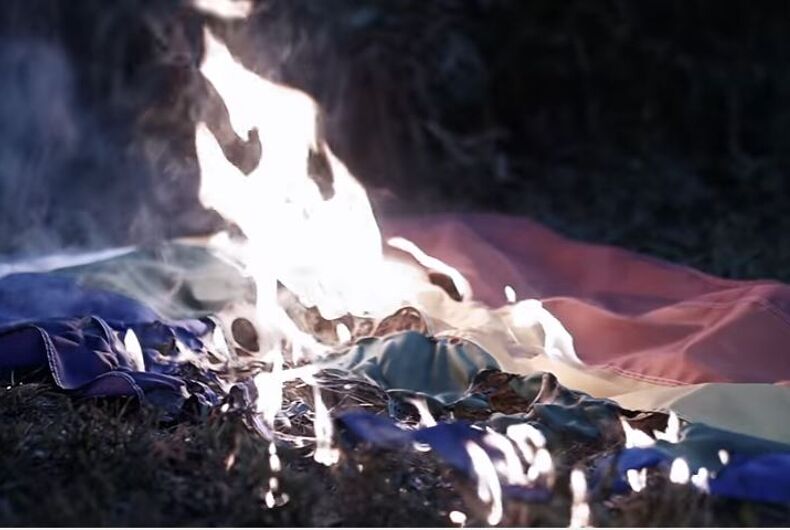 Television host Mike Rowe has waded into the flag burning debate, arguing that the American flag is more than just a “mere symbol.”

Rowe posted his reaction to seeing students burning the flag on Facebook last week, taking umbrage with Jonathan Lash, President of Hampshire College, floating the idea of removing the flag from campus to better focus their attention on “addressing racist, misogynistic, Islamophobic, anti-immigrant, anti-Semitic, and anti-LGBTQ rhetoric and behaviors.”

“I couldn’t help but wonder if President Lash was unaware that billions of people around the world are routinely subjected to horrific levels of racism, misogyny, and bigotry that far exceed any injustice in modern-day America,” Rowe wrote.

As one would expect for anyone who takes a firm stance one way or the other on flag burning, Rowe got some angry mail.

One such self-described former fan, Susanne McDaniel, accused Rowe of being “blindly patriotic,” calling the flag “a mere symbol” and suggesting he take a civics class.

Rowe responded via an open letter, again posted to Facebook. He pushed back on the idea that flag burning doesn’t carry a strong connotation that must be taken seriously.

“I’ve never thought of myself as ‘blindly patriotic,’ but I am a fan of the United States, the founding fathers, and the men and women who have served on my behalf. I also confess to feeling lucky to live here,” Rowe responded. “Having said that, I think you’re correct about the flag; it’s only a symbol. So too is the Crucifix. And the middle finger. And the Swastika. And the compressed chunks of carbon that millions wear on their ring fingers as expressions of timeless love and eternal devotion.”

“It’s easy to make anything feel small and silly by reducing it to its chemical composition or its various component parts. But if you really believe our flag is nothing but a ‘mere symbol,’ equally suitable for flying or burning, ask yourself if you’d be comfortable if the people you work with suddenly started coming to the office in pointy white hats fashioned from bedsheets?” he continued. “Would that be a problem for you? Or how about The Rainbow Flag, favored by the LGBTQ community? Would it be OK if people started burning that? If not, why not? I mean, it’s only a symbol, right?”

Read his full reply below.

Donald Trump is arguing that no one should be able to burn the American flag, in spite of the fact that that right is guaranteed by the First Amendment.

When a protester held up an upside down American flag at a Trump rally in North Carolina, he was attacked by a gay Trump supporter in the crowd and admonished by the then Republican candidate, now president-elect, from stage.

Trump held up an upside down pride flag at a rally in Colorado during the campaign “LGBTs For Trump” crudely scrawled across it, which one might argue is not the most dignified display.

The rainbow flag was also set on fire, lit with a lighter emblazoned with a Hillary Clinton logo, in a pro-Trump campaign ad produced by openly gay Breitbart tech editor Milo Yiannopoulos, who was arguing against increased immigration by suggesting it is a threat to the LGBTQ community.

After the election, pride flags were burned and Clinton yard signs vandalized in Rochester, New York.

‘Hamilton’ fans targeted by serial pickpocket, but NYPD has its eyes on her

Joe Biden comes clean to Colbert: ‘no plans’ to run in 2020 (but he still might)