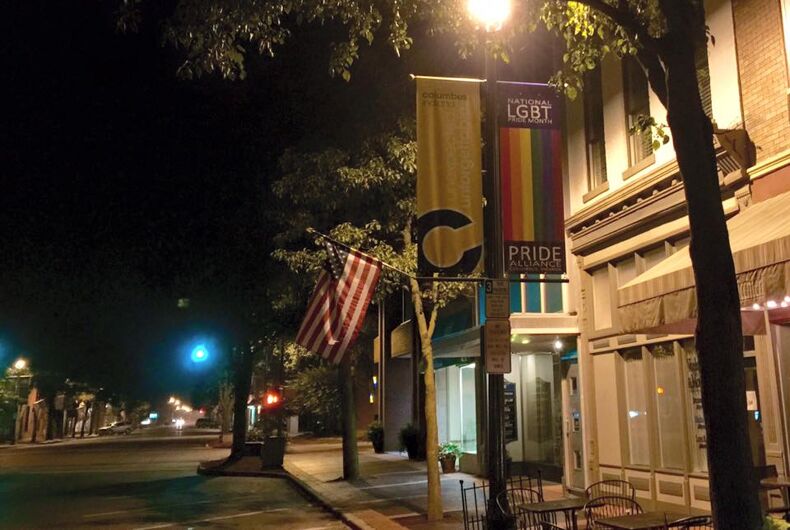 Columbus, Indiana has banned a local LGBTQ group from displaying pride banners on city light poles in what the city says is an effort to “promote tourism.” The city also notified the United Way and an anti-abortion group that their banners were no longer welcome.

Commercial and political advertising will be banned, as well as “issues considered controversial in nature which promote or incite civil disorder and are not community-event specific” according to the Columbus Republic. Instead, all banners will now “represent or promote non-profit cultural or civic events that are event-specific and promote the downtown area.”

The Columbus Board of Works approved the changes today despite the protests of some program participants. National Family Week asked for a three year exclusion, but the board denied the request. The city gets about 20 requests annually to hang special banners.

Brian Walters, a former board member and acting treasurer of Pride Alliance of Columbus expressed disappointment with the decision. “I’m disappointed that for all it’s progress, Columbus still considers this to be such a ‘controversial’ issue,” he said.

Karen Niverson, executive director of the Columbus Area Visitors Center, told the Republic that she thought the city should help the organizations like Pride Alliance find a new place to hang the banners in the city.

Columbus was one of a handful of towns in Indiana to pass a city ordinance forbidding discrimination based on sexual orientation or gender identity after the state legislature passed a so-called “religious freedom” law allowing businesses to discriminate against LGBTQ people. Governor Mike Pence, now Vice President-elect, signed the bill into law before being forced to “fix” it after a national outcry.

While the state law was driven and signed by Republicans, the Columbus city council and mayor’s office were also held completely by Republicans. The ordinance passed unanimously.

Two religious right organizations have sued in state court to have the ordinance repealed, saying it violates the updated RFRA law.