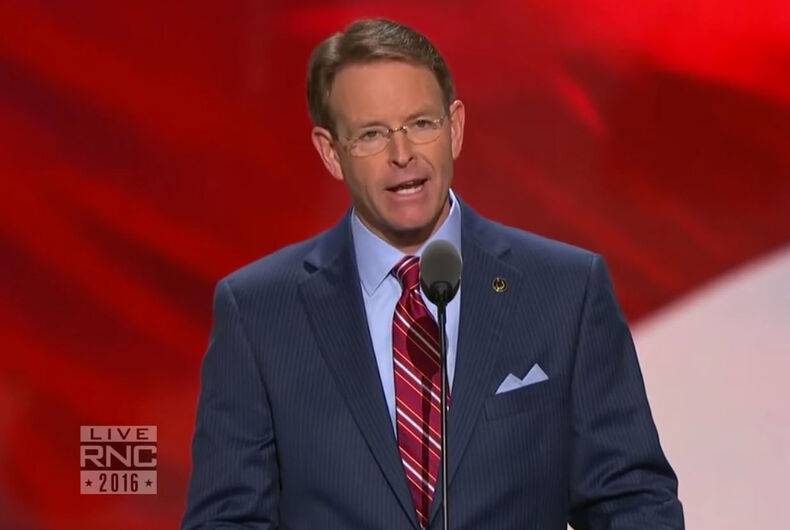 The New York billionaire made the announcement in a predawn statement, describing Tillerson as “among the most accomplished business leaders and international deal makers in the world.” And as is now tradition, the president-elect tweeted Tillerson’s selection.

I have chosen one of the truly great business leaders of the world, Rex Tillerson, Chairman and CEO of ExxonMobil, to be Secretary of State.

The thing I like best about Rex Tillerson is that he has vast experience at dealing successfully with all types of foreign governments.

Trump called Tillerson’s career “the embodiment of the American dream.”

But he’s a nightmare choice according to Perkins, the president of the Family Research Council, who surprisingly is on the same side of Chad Griffin, executive director of the Human Rights Campaign. Perkins bashed Tillerson on his FRC blog, calling him potentially “the greatest ally liberals have in the Cabinet for their abortion and LGBT agendas.”

“Trump calls Rex a ‘world class player and deal-maker,’ but if these are the kinds of deals Tillerson makes — sending dollars to an abortion business that’s just been referred for criminal prosecution and risking the well-being of young boys under his charge in an attempt to placate radical homosexual activists — then who knows what sort of ‘diplomacy’ he would champion at DOS?”

As Politico reported, Perkins was referring to Planned Parenthood, whose health services include abortion. Although religious activists like Perkins accuse ExxonMobil of donating to the organization, the company’s policy is to merely match employees’ charitable gifts, as explained in a 2015 statement:

“ExxonMobil’s giving through these programs is based entirely on employees and retirees’ support for these organizations and does not reflect ExxonMobil’s philanthropic priorities or support for community causes.”

Perkins also accuses Tillerson of playing a role in the Boy Scouts of America’s decision to allow gay scouts as well as gay troop leaders.

“Unfortunately, the BSA, under Tillerson, ultimately caved to the pressure of the far-Left, irreparably splitting the Scouts and destroying a proud and honorable American tradition. Under his chairmanship, ExxonMobil’s score on the Human Rights Campaign’s Corporate ‘Equality’ Index has also skyrocketed to 87 percent.”

Interesting that Perkins should cite HRC, given that ExxonMobil also has the ignoble distinction as the only company to ever receive a negative rating, earning a negative 25 both in 2012 and 2013. Its 2017 score is 85.

“ExxonMobil CEO Rex Tillerson’s nomination raises critical questions as to how a Trump administration plans to protect LGBTQ employees and contractors affiliated with the State Department, and ultimately whether it will continue American efforts to advance equality through U.S. foreign policy.”

Several Senate Democrats and even some Republicans have expressed about Tillerson’s business ties to Russia, which praised his nomination Tuesday.

Russia’s foreign minister called the “pragmatism” of Tillerson, a good basis for future relations. Sergey Lavrov told reporters in the Serbian capital that both Trump and Tillerson “have not been against our cooperation.”

“We expect that this pragmatism will be a good foundation for building mutually beneficial cooperation” between the U.S. and Russia, Lavrov said.

The subject will no doubt come up during Tillerson’s Senate confirmation proceedings.