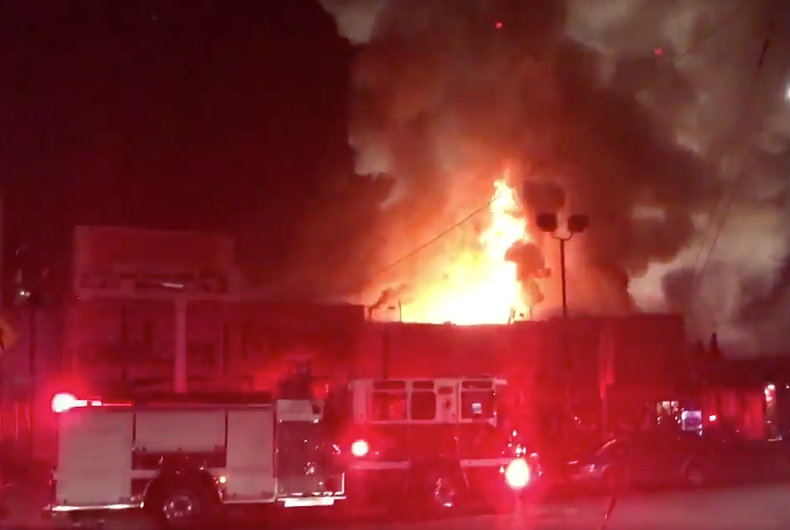 Flames overwhelm a Fruitvale warehouse where revelers — including numerous queer, trans, and gender non-conforming guests — gathered for a party. At least 9 people are believed to be dead, and dozens more are still missing.Photo: Oakland Fire Department via Twitter

At least nine people are believed to be dead after a blaze broke out during a party in a converted warehouse known as the Ghost Ship late Friday night in the San Francisco Bay Area, according to fire officials.

Numerous queer, trans, and gender non-conforming people are believed to have been in attendance. Many are still unaccounted for.

Oakland Fire Chief Teresa Deloche-Reed said at least another 25 people are unaccounted for as of Saturday morning. Authorities said about 50 people were inside the building, and according to Alameda County Sheriffs Office Sergeant J.D. Nelson, the coroner’s office is preparing for at least 40 bodies.

Because it’s still too dangerous to enter, no bodies have yet been removed from the building. Authorities are working to verify who was in the building when the fire broke out Friday around 11:30 pm during Golden Donna’s 100% Silk West Coast tour.

A Facebook page for the event now hosts a list of people believed to still be missing. People are being asked to verify those they know are safe.

Among those believed to be missing is musician Joey Casio, a frequent performer in the Olympia, Portland, and Bay Area queer club scenes.

The cause of the fire is unknown, but fire officials say the warehouse appears to have lacked smoke detectors or sprinklers.

“It was too hot, too much smoke, I had to get out of there,” Bob Mule, a photographer and artist who lives at the building, told the East Bay Times. “I literally felt my skin peeling and my lungs being suffocated by smoke. I couldn’t get the fire extinguisher to work.”

Those concerned about missing people are being encouraged to call the Alameda County Sheriff’s Coroner’s Bureau at 510-382-3000. Facebook also has a safety check-in option set up for the fire, so those who are safe can let their loved ones know.

The Associated Press contributed to this report. We will update this post as more information becomes available.

Why marginalized communities should care about Standing Rock and the DAPL