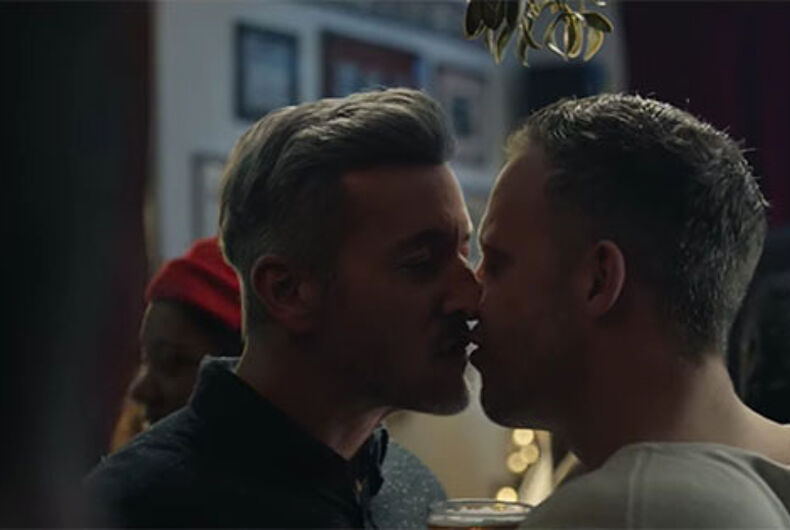 Truth be told, it doesn’t come with the same excitement American boys experience when they hear the “The New Hess Truck’s Here!” jingle. But across the pond, Twitter users are gobsmacked about the annual Christmas “advert” by BBC One, the main, royal government-chartered television channel across England, which features two men kissing.

The British Broadcasting Corporation calls the commercial its “festive film,” and it shows Britons of all nationalities enjoying the holidays as well as, of course, “the telly.” And more than a few tweets showed viewers think the ad is the bee’s kneees.

Well done @BBC, showing a #samesex kiss in all normality. It shouldn't be big news this #Christmas https://t.co/vNh8RgScnB h/t @waynedavid81

I do love the BBC. It shouldn't feel incredible to see a gay kiss on prime time in 2016 but it really does #pride #bbc #christmas https://t.co/P82pwJnQU9

Hi @DailyMailUK just wanted to flag up there's a same-sex kiss in this BBC promo. What is the world coming to, eh? #BBC #Gay #Christmas https://t.co/sOcvNWwOK3

OMG a BBC Christmas trailer featuring a gay kiss, the Daily Mail is going to shit itself!!!

And if Towleroad is to believed, the Beeb hasn’t received one complaint. Nice one.

Watch for yourself below, and tell us in the comments if you think it’s ace, or “ho-ho-hohum.”