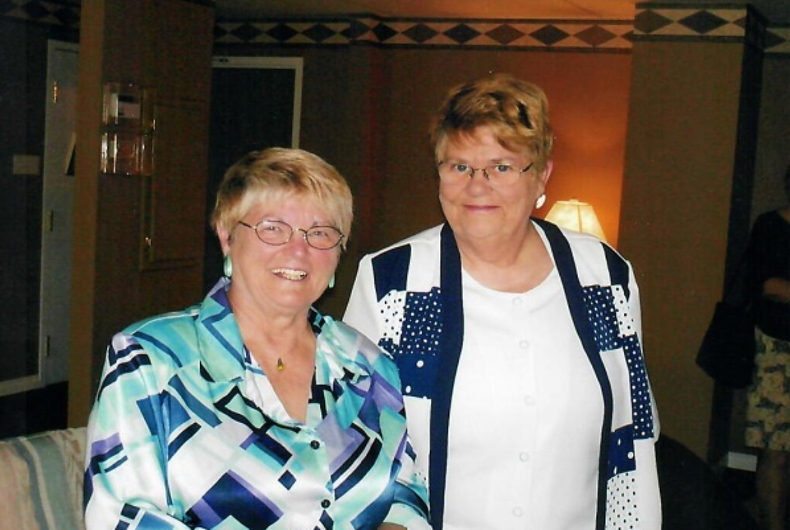 Jean Baker, then 26, had spent an hour and a half sitting alone at the bar, waiting for someone to talk to her. It was the young single mother’s first time in a gay bar.

“Nobody said hi to me. I felt really annihilated,” Baker, now 76, told CBC. “I backed my car out of the parking lot and was heading out of the street, and I saw this lady, who was walking like John Wayne — she has this big stride on her — and I thought, ‘Well, I’ll ask her where girls meet.'”

She explained that it was off the top of her head, and only delivered after much trepidation. She had only ever been on the receiving end of pickup lines in the past.

The woman, Sharon Colter, agreed, after a little bit of convincing.

Their romance got serious quickly, with the pair moving in together the day after meeting one another. Baker was in need of a steady babysitter and Colter had just lost her job.

“She came to the rescue,” said Baker. “She loved kids…After we really got serious, she said, ‘I always wondered how I would have a family,’ so that worked out really well.”

They had to keep their relationship as an open secret, even from their own children, after moving to a small rural town where they were unaware of any other gay couples. They wanted to protect the kids from bullying at school.

“I was 12 years old, and I walked into their room, which, you know, come on, they shared a room…and I walked in, and I said, ‘Mom?’ ‘What honey?’ ‘Are you guys gay?’ and it was kind of a funny moment,” their daughter, Allison Nelson, told CBC.

“My parents were so great and so giving, and they helped out anyone and everybody, and they were so warm, you know, how can you turn your back on that because of somebody’s sexuality? I mean, that just didn’t happen,” said Nelson. “All the really great things about me as a person are because of those two women without a doubt.”

They eventually moved to Winnipeg, where they ran a catering business together. Colter was by her side as she beat cancer.

A shared love of dance continues to connect them to this day, with Baker not slowed down by the braces she wears on her legs.

“Even when we fall apart, not really working in sync, the day we get on the dance floor, we recollaborate,” Baker said.

“We went to my grandson’s wedding a year ago…she dragged me around and we almost had to put my foot on her feet to get me dancing. We still did it,” she added. “She is the surprise of a lifetime.”

The pair have not married themselves, not feeling a need after so many years together.

They spent the day with a shopping trip and dinner, as well as a movie at home.

“When we were discussing it in the morning, I said, ‘Are you kidding me? We actually made it to 50 [years].’ It doesn’t feel any different,” Colter said.

MSNBC cancels gay anchor Thomas Roberts’ show, but won’t say why they did it

This proposal scores an unexpected smile from a stranger, and it’s perfect