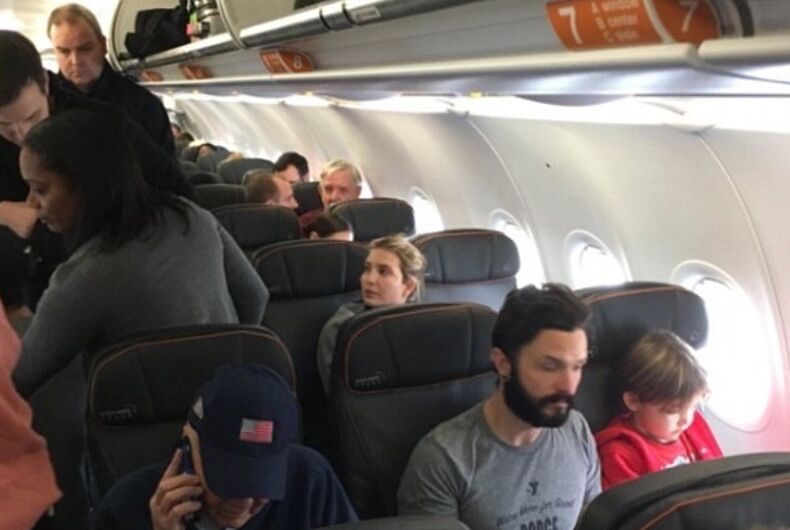 Ivanka Trump waits for a JetBlue flight to take off as an unruly passenger is removed.Photo: Twitter/mattlasner

A married gay man and his husband and child were pitched off a JetBlue flight this morning after he accosted Ivanka Trump and her family on the plane.

Brooklyn lawyer Dan Goldstein apparently started berating Trump before the plane took off, telling her “Your father is ruining the country.”  He continued screaming things like “Why is she on our flight? She should be flying private” according to reports on social media.

Goldstein’s husband, Matthew Lasner, posted a photo of Trump seated on the plane to Twitter with the caption, “Ivanka just before @JetBlue kicked us off our flight when a flt attendant overheard my husband expressing displeasure about flying w/ Trumps.”

A couple of minutes later, he tweeted, “Ivanka and Jared on our flight. My husband expressed displeasure in a calm tone, JetBlue staff overheard, and they kicked us off the plane.”

An earlier post by Lasner, however, paints a completely different picture.

“Ivanka and Jared at JFK T5, flying commercial. My husband chasing them down to harass them. #banalityofevil,” that tweet said.

All the tweets were deleted after the story hit the news.