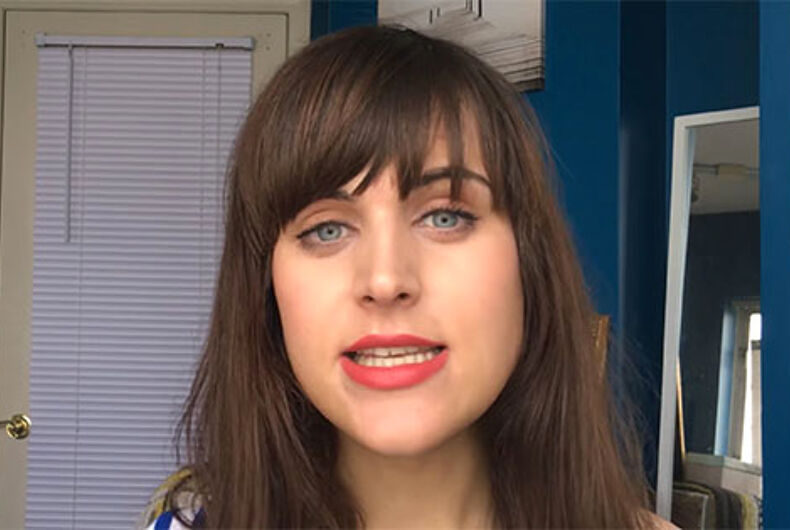 The headline, “Why LGBT People Should Be Conservative,” grabbed my attention Wednesday morning as I scoured the interwebs for news stories of interest to me, and by extension, to our readers.

Not that I agree, but I like to think that as a progressive transgender advocate with a smattering of conservative, pro-life friends, it’s usually helpful to read what the opposition is thinking.

My interest waned when I saw the source: the arch-conservative, misogynist and homophobic online rag, The Daily Caller, which preceded Breitbart as the standard bearer of right-wing, anti-liberal biased reporting. This outfit, founded by FOX News anchor Tucker Carlson, is so biased, and so anti-everything we believe in, that you’re not going to find a hyperlink to their site here, nor to that opinion piece by a transgender woman named Theryn Meyer. But I will quote from it, and will explain why it’s important we know what she thinks. I have provided links to her social media, below.

Who is Theryn Meyer? She is a wanna-be Blaire White, an anti-feminist transgender personality on YouTube and Twitter who is uber-popular with more than 200-thousand right-wing followers. 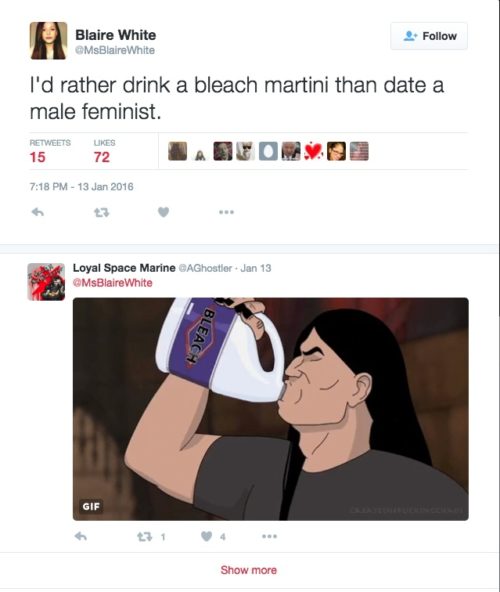 Meyer is also a YouTuber with a right-wing perspective, a colorful history, and like White, drop-dead gorgeous looks. She boasts more than 7,000 followers on Twitter and 15,000 subscribers on YouTube.

When she attended Simon Fraser University in Vancouver, British Columbia, she was president of the Advocacy for Men and Boys club, a men’s rights activist group.  A profile in Daily Xtra identified her as 21, a native of South Africa, and at the time of publication in January, she was studying musical composition. She advocates against feminism, labeling herself an “afeminist:”

“I don’t like feminism constructing a trans identity around victimhood,” she told Daily Xtra.

“I used to be a feminist, and I was a fucking wreck. I was eating up everything that feminism fed to me: that the world was out to get me, that the world was structured to not accommodate me. And of course that’s true to some extent, but it was the constant harping about it, and the idea that you can never do anything about it as an individual. When I finally turned my back on all that stuff and I started realizing the strength I have as an individual, that’s when I started becoming strong as a trans woman.”

“I decided I was done” with feminism, she said, when protesters demanding gender-neutral bathrooms at her university only occupied men’s rest rooms on campus. She’s since become a darling of the MRA movement.

And as expressed in her op-ed, Meyer believes the LGBTQ community has been led astray and that to truly secure our rights we must turn our backs on left-wing liberalism and embrace conservative politics.

If it were not for her politics, Meyer might appear to have a lot in common with transgender people all around the world. She wrote:

“Growing up a gender-atypical child in the politically broken and culturally fragmented country of South Africa, social acceptance and even basic tolerance was often hard to come by. Dealing with the growing pains of adolescence as an unworldly teenager is challenging enough. But doing so in the lonely corner after being shunned by everyone in the room – your family, your friends, your community, your tribe – can make life for a queer kid seem unbearable at times.”

Neighbors who supported lesbians get Bostonians of the Year honorable mention