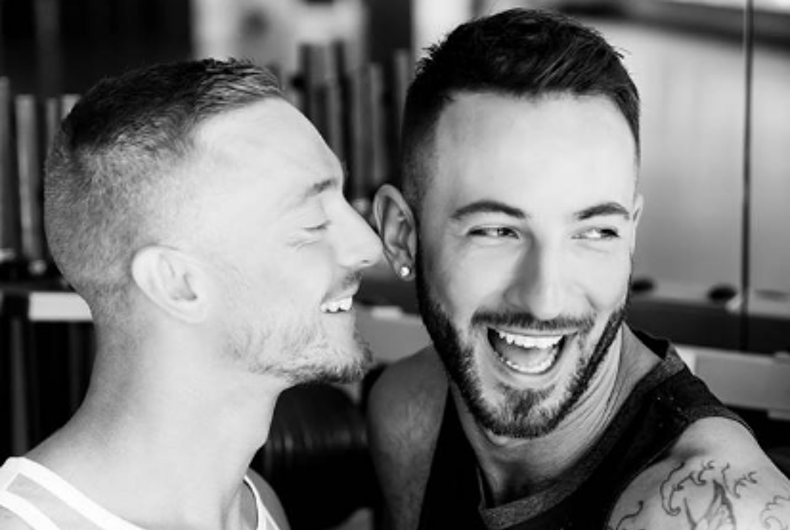 Mikey and Nico had been eyeing one another at the gym, a Fitness First Gym, Kings Cross, Sydney, but both were too shy to speak to one another. Finally, Nico worked up the courage to say hello and before long they were an item.

Exactly one year after meeting, Nico proposed at the gym where they met. And it was no ordinary proposal, either.

“I like dancing, I’m a loud person and for me this was a way for me to be loud in a different way; to be able to shout out my love for Mike,” he told How He Asked.

“This proposal was also a way to send a message that ‘love is love’ no matter what your sexuality is,” he added. “That’s why I chose two Beyoncé songs ‘Love On Top’ and ‘End of Time’ to dance to. I also wanted one day to be able to re live that moment with Mike so I wanted to create something memorable. Perhaps one day when we are old and we can share it with our children.”

“When I met Mike for our first date, it was simply amazing and I felt an instant connection. Our first date felt like we were already in a relationship,” Nico recalls. “He picked me up after he finished work, we went to the supermarket, bought food for a BBQ, then went to his place and prepared and cooked the food together. We both previously had been in long term relationships but they were relationships that never had the feeling of ‘I want to spend the rest of my life with this guy’. With Mike it’s been such an amazing feeling from the start and the spark never left; it only continued to get stronger and still continues to grow every day.”

Watch the big moment in the video below.

Bob the Drag Queen banned from Grindr for impersonating himself