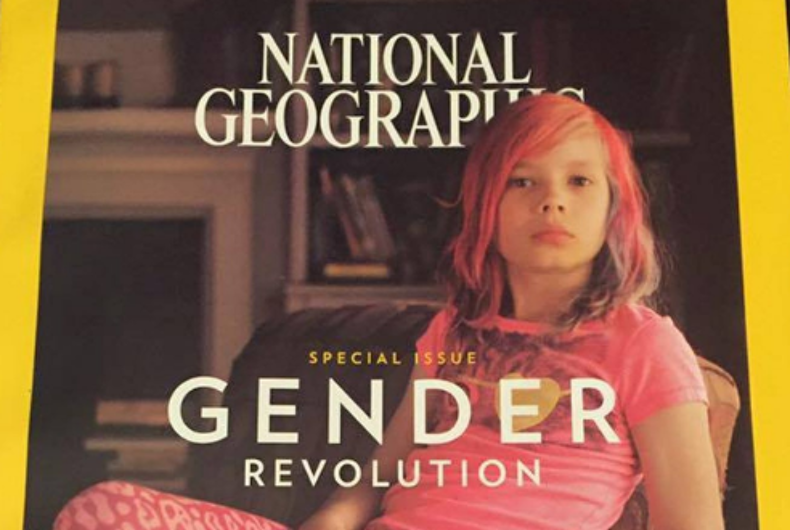 Theodore Shoebat — the extremist, anti-LGBTQ YouTube hatemonger who called for Donald Trump’s execution for holding up a Pride flag during the presidential campaign — has crossed the line of public decency and attacked a nine year old girl who is transgender and in the news.

As LGBTQ Nation reported last week, Avery Jackson is featured on the cover of the next issue of National Geographic magazine and in its featured report on gender. And as Right Wing Watch reported, that has clearly outraged the man who once declared Jesus would slaughter all gays:

“The kid is obviously evil, obviously a reprobate, obviously just diabolical,” cried Shoebat, before addressing the nine-year-old child directly in his YouTube video. “You’re a freak. You’re a little demon. You’re a little Nazi Hitler,” he said. “This little freak would not mind sticking people like me in a gas chamber.”

Again, Jackson is nine. Shoebat is a self-proclaimed “Christian militant” labeled an extremist by the Southern Poverty Law Center.

“This is sick shit,” Shoebat ranted, “and this is the problem that I have with the First Amendment, the freedom to do whatever you want. In the Catholic Church, the whole damn crew behind National Geographic would be tried and once they are found guilty, they would be burned at the stake.”

Watch the video below, then scroll down to learn that Shoebat isn’t the only anti-trans voice angry at National Geographic.

And he’s not alone.

The anti-LGBTQ hate group, the American Family Association, called on its supporters to harass National Geographic’s editor, Susan Goldberg, accusing her of “using a young child in an abusive manner,” in an email first reported by PinkNews. The AFA told its flock to send her this letter:

“I am offended by your choice to place a young child that is struggling with gender dysphoria on the cover of your January edition.

“Out of all of the ‘transgender’ adults you could have chosen as your feature, you chose to exploit a young boy. Your entire feature focuses specifically on children, which is exploitation at its worst.

“From the beginning of mankind there have been only two sexes: male and female. No child should be used to push an unnatural social agenda.

“I am asking that you publicly apologize for taking advantage of these children in this manner and commit to avoiding similar actions in the future.”

The email blast from the AFA added this additional condemnation:

“National Geographic is the latest print media company to abandon what it does best to foist a lifestyle in the American public that the medical community identifies as unhealthy.

“Imagine the pain and psychological trauma gender dysphoria causes children and adults. Rather than abandoning geography to shame Americans into embracing such a lifestyle, we should be helping individuals who struggle with this disorder. That is, helping confused individuals accept their wonderfully crafted and God-given biology.”