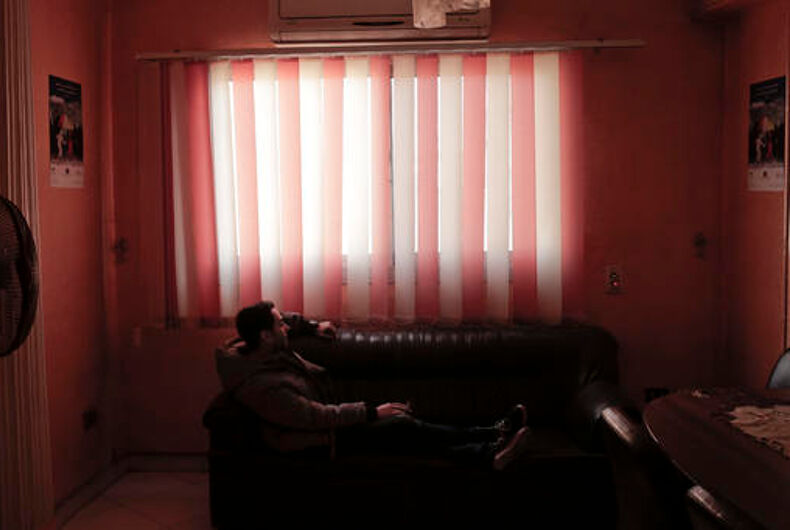 In this Tuesday, Nov. 29, 2016 photo, Ahmed, who is living with HIV, rests at the office of the Roaya Association for Integrated Development, the largest of the few groups in Egypt that look after people living with HIV. Ahmed spoke to The Associated Press on condition that his full name not be used, details of his life not be given and his face not be shown in photos _ a sign of how overwhelming the stigma remains here 30 years after the first case of HIV infection was discovered in Egypt.Photo: (AP Photo/Nariman El-Mofty)

CAIRO (AP) — In his bedroom, there’s a drawer full of his medications — along with CDs of a popular Egyptian Muslim preacher. On the walls of the home are two paintings by his father. They’ve had a strained relationship. He opens an album and shows pictures of his mother.

His mother supported him after she discovered he was HIV positive. When the doctor initially refused to treat him, she threatened to sue him.

“I was lucky my mother was still alive,” said Ahmed, a 40-year-old who is among the around 11,000 Egyptians living with HIV. She passed away recently, and now he wants to leave Egypt. He can no longer stand the social stigma around HIV and AIDS.

Ahmed spoke to The Associated Press on condition that his full name not be used, details of his life not be given and his face not be shown in photos — a sign of how overwhelming the stigma remains here 30 years after the first case of HIV infection was discovered in Egypt. Though it is spread more here by heterosexual contact, as well as drug use and sex work, the disease is strongly linked in the public’s mind to same-sex intercourse and homosexuality, which are profoundly taboo.

“The first question people ask me is, ‘How did you get it?” Ahmed said.

Egypt has one of the lowest rates of HIV infection in the world, at less than 0.02 percent of the population. But the numbers of new cases have grown by 25 percent annually, according to Ahmed Khamis, UNAIDS country manager. The Middle East-North Africa region is one of the only two regions in the world were the pace of infection is increasing, along with Eastern Europe-Central Asia.

In Egypt, that is in part because of greater reporting, but it’s also due to limited resources for prevention, workers in the field say. Fear, ostracism and condemnation still surround HIV/AIDS. Many have the misconception that it is easily contagious from a touch, and the HIV-positive can face being thrown out of families — or even, in rural areas, from their villages.

“The whole community still does not accept AIDS,” said Mona, who was diagnosed 14 years ago with HIV.

When she gave birth to a daughter in 2002, doctors threw her out of the hospital when they found her newborn had full-blown AIDS. So she took the baby home to take care of her.

“My daughter died in my arms,” said the 39-year-old, who also asked that her full name and image not be used.

Now only her parents, her two sons and her co-workers know she is HIV-positive.

She and Ahmed now work for the biggest of the few groups in Egypt that look after those living with HIV and AIDS, the Roaya Association for Integrated Development. The organization aims to spread awareness, break social taboos and train hospital staffers on how to deal with HIV-positive people.

“There is this idea that people living with HIV are aliens and unproductive people just waiting for their death bed,” said the group’s Civil Society Manager Nasser Hashem. “Change takes time.”

He said there have been cases of people fired from jobs after their HIV-positive status was discovered. One man was asked to bring his own pen to work to sign his monthly salary check.

Negative attitudes are even found among medical personnel. He gave an example of a doctor whom the group trained, but when he received a person with HIV, the doctor blamed him for his disease, telling him, “You deserve this, you brought it upon yourself.”

UNAIDS has been working with the Health Ministry and NGOs on awareness campaigns in the media and outreach to youth, even engaging with the country’s large movie industry to encourage films that positively address HIV issues.

But the Global Fund, a major financer, suspended most grants to Egypt last year because of irregularities in the Health Ministry’s use of its money, according to the Fund. The government has increased funding, but the total overall hardly covers treatment and doesn’t deal with prevention.

“We are facing a big resource gap for HIV today,” said Khamis of UNAIDS. Egypt is “at a crossroad … and with the right push, both in terms of resource allocation and political commitment, it will have a very high return on investment.”

© 2016, Associated Press, All Rights Reserved.
This material may not be published, broadcast, rewritten, or redistributed.
Health and Wellness
Egypt, HIV stigma, HIV/AIDS, living with HIV