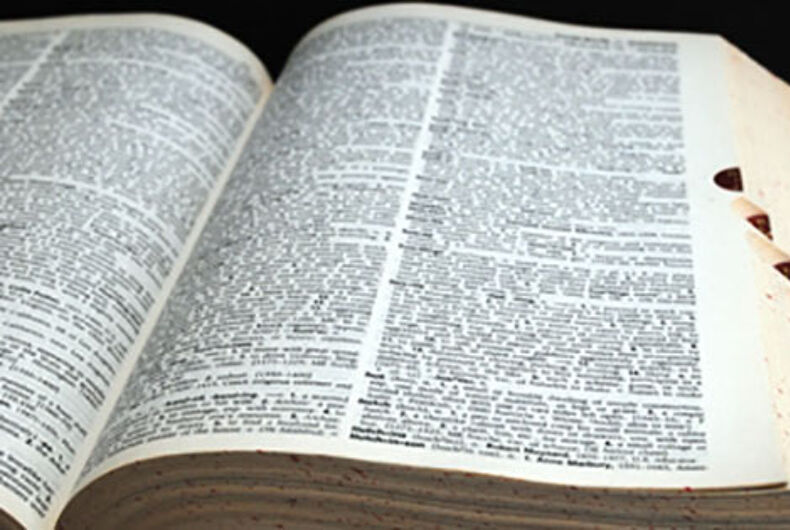 “The beginning of wisdom is the definition of terms,” said Socrates, and the wise people who watch over the definitions contained in the Merriam-Webster unabridged dictionary have revealed a playful minx hiding behind those librarian glasses.

And she’s clearly either one of us or a really great ally.

Back in April, Merriam-Webster — the nation’s oldest and most widely used dictionary — added some words to its unabridged collection, including cisgender, Mx. and genderqueer.

Cisgender, Mx., and genderqueer are all new additions to the Unabridged today. Here's our article on 'cisgender'. https://t.co/9fvlhnlIPv

Human Rights Campaign hailed the additions, writing in an online blog post, “The move helps broadens public understanding of the increasing diversity of words that people within the LGBTQ community use to describe their identities.”

Yeah, well, you’d think so. Merriam-Webster’s tongue-in-cheek Twitter account responded to some flak about “genderqueer,” a term in use since the 1990s.

2) asking why we added it to the dictionary pic.twitter.com/wsGZ7Y6XB8

The company’s come a long way since 1999, when its editors, red-faced, took action to remove some antigay definitions of “homosexual.” The New York Times reported on the controversy, noting Merriam-Webster and America Online “temporarily removed an on-line thesaurus on Friday that contained a word list for ”homosexual” that included references to ”faggot,” ”fruit” and ”pederast.'”

Is it time to add 'sapiosexual' to the dictionary? https://t.co/PL1asS3BMD

And in true form, when the dictionary was knocked for its inclusionary question, the Huffington Post reports it responded boldly and confidently:

We were born ready. https://t.co/LPWtMm5c1d