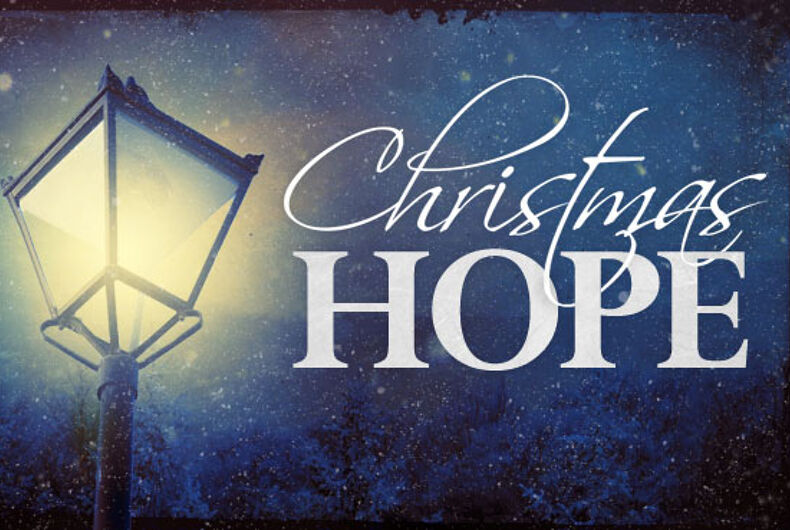 I am well-known for my disagreements with Christianity and certain Christians. Christmas, though, just melts my heart.

There’s the fact that presents are involved, and I do love presents. But there’s something else about Christmas that snared me when I was so young I couldn’t tell a Christian from a Jew from a Hindu.

It’s this: Who can resist a holiday about hope?

Don’t take this as an attack on other holidays. I was born in 1952 in Detroit, Mich., and raised in a suburban home in the Christian tradition in an overwhelmingly Christian culture. I’ve dabbled in Buddhism, and warmed myself on a few Solstice fires, but I don’t know enough about the holidays of those or any other religion to write knowledgeably about them. Even more importantly, I didn’t sing Buddhist chants, or toddle through Solstice celebrations as a preschooler.

I hung old-fashioned (and probably dangerous) lead tinsel sparkling on Christmas trees. I put up green and blue ornaments and wrapped packages in glossy red paper. I sang along with Mitch Miller on “Hark, The Herald Angels Sing,” and thought I was singing about a little angel named Hark. I heard the Christmas story recited with reverence year after year. Although that recitation was on TV (by Linus at the end of “A Charlie Brown Christmas”), it still meant something to me. Christmas stuck deep in my heart in a place that can only be reached when footie pajamas are the norm and teddy bears accompany you to bed each night.

In my not-too-observant Protestant family, Easter was nothing more than a big meal. Christmas, on the other hand, was Hope and Love, and something even more amazing: Christmas was when we stopped doing, scolding, hurting, yelling and acknowledged that life could be about something else.

I don’t remember that we had a name for this thing that Christmas was about. But I do remember that miracles were supposed to be involved. At the time, I wished fervently for peace in my own family. Even though that miracle didn’t come when I was a child, I still took heart from the fact that wonders could and did show up in other people’s houses.

Perhaps that’s why I love Christmas stories. They’re about hoping for no rational reason and then witnessing hope fulfilled. A mean old miser spits on Christmas, has a few nightmares, and then wakes up to take care of those he once spurned. A scattered, bickering family unexpectedly comes together on Christmas Eve. An embittered heart grows three sizes and that old Grinch finds the strength to put back all the presents, decorations and holiday dinners he had taken. Workaholics remember to come home. The lonely find friends. The broke get money. And evictions never, ever occur — at least not in Christmas stories.

It’s as if once a year we give ourselves permission to imagine life as it should be. We even act differently as we give presents, greet each other more warmly and do good deeds that we ignore the rest of the year. Once every 12 months we realize it’s safe – encouraged even – to be good.

This is the place in a Christmas essay where I’m supposed to shake my head sadly and declare my disappointment that we don’t keep Christmas throughout the year. But I’m not disappointed. I feel – and I apologize for overusing this word – hope.

We human beings are a mess. We act out of fear. We skitter on impulse. We put our heads down and plod through the most soul killing of lives because we can’t allow ourselves to believe there’s anything better. We hurt, oppress, exploit each other. Repeatedly. And then claim it was our victims’ fault. I’m not even certain that most of us are completely sane.

That’s why I love Christmas.

For all who are keeping Christmas and all who are celebrating the many other holidays of hope, my best wishes for now and the New Year. And a thousand hugs.

Does a doctor’s gender affect your chance of survival?