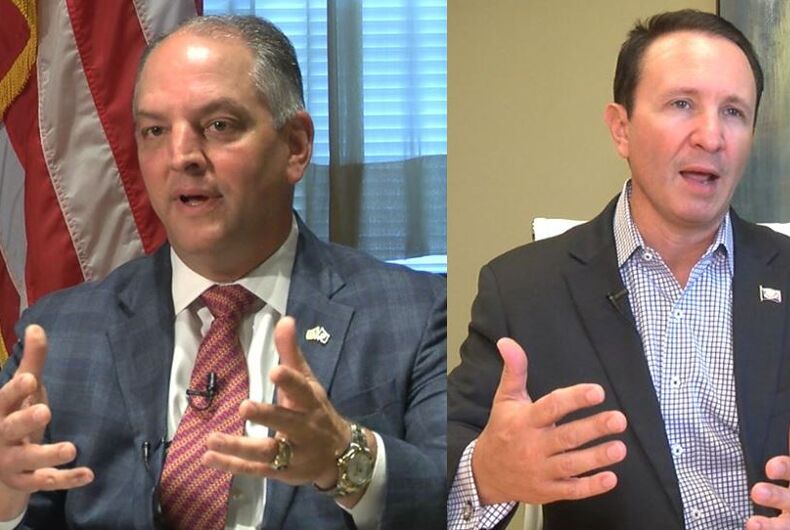 Both sides wrote in their legal briefs that their opponents didn’t present evidence or witness testimony to back up their positions at a hearing this week.

Republican Attorney General Jeff Landry wants to block Edwards, a Democrat, from enforcing his executive order prohibiting discrimination in government and state contracts based on sexual orientation and gender identity. Edwards is asking the judge to spell out the boundaries of Landry’s authority.

But she said the attorney general’s office presented a “preponderance of evidence” to show the executive order is an overreach that “impinges on the authority of independent statewide elected officers and offices.”

Judge Todd Hernandez said earlier this week that he hoped to make a decision quickly after getting the final written arguments.

Edwards says his LGBTQ-rights protection order, issued in April with an exception for contractors that are religious organizations, is a statement that Louisiana doesn’t discriminate. Landry says it’s unconstitutional because it seeks to establish a new protected class of people that doesn’t exist in law and that lawmakers refused to add.

The attorney general’s focus, Murrill wrote, is the gender identity language in Edwards’ order, which protects transgender people. She said while Landry suggests throwing out the entire executive order “is appropriate,” he’d also support the judge blocking enforcement of only the gender identity portion.

Block wrote that Landry’s lawyers didn’t show any problems that could develop because of the language in the executive order, like a vendor wishing to contract with the state who objects to the non-discrimination clause. Instead, he said the attorney general’s office presented witness testimony that described “hypothetical concerns.”

Murrill countered that her office showed problems because of Edwards’ order.

She cited the delay in the approval of a contract Landry wants to hire an outside lawyer to defend seven state abortion laws. The contract hasn’t been approved, she said, because the Edwards administration won’t agree to it without the anti-discrimination language.

Also, the Edwards administration won’t approve an agreement to transfer $18 million budgeted to the attorney general’s office because Landry refuses to include the executive order language in the agreement. The stalling of that money, Murrill wrote, “clearly creates a significant deficit in the attorney general’s operating budget and places people’s jobs in jeopardy.”

That situation, Block wrote, “is self-inflicted by the attorney general’s refusal to abide by the executive order.”

According to testimony this week, as many as 100 contracts for state agencies and boards to pay outside lawyers are stalled because of the disagreement.

Janet Mock on the election: ‘We will not be forced to be silent’