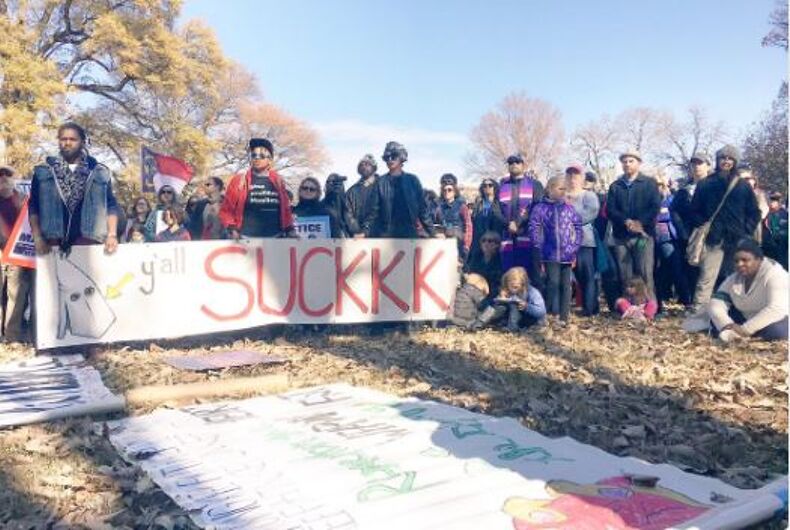 Demonstrations and pro-love rallies took place on Saturday to counter a planned KKK parade in North Carolina celebrating the election of Donald Trump.

Charlotte responded with a rally of their own on Saturday, standing up for love and against hate.

The “Charlotte March For Love” was organized by a group of clergy and community activists.

A diverse, sizable crowd gathered at Marshall Park in uptown to listen to speakers and performers rally for the power of unity and acceptance over divisiveness and bigotry, before marching to three monuments that speak to the importance of that message.

The event concluded with those in attendance gathering hands around the statue of King while singing, “We Shall Overcome.”

Watch our Facebook live video of the “Charlotte March For Love” below.

The KKK announced on Friday their rally would take place somewhere near Pelham, North Carolina, a small unincorporated town along the North Carolina and Virginia border.

An anti-Klan rallies also took place in Raleigh and in Albany, New York.

Counter protesters at time of writing report they have gone from Pelham to nearby Danville, Virginia trying to locate the KKK with no luck. They are demonstrating in the streets in Danville all the same.

Watch demonstrators marching against the KKK in Pelham and Danville.

The KKK have been spotted in Roxboro, via Burlington Times-News reporter Natalie A. Janicello:

Just followed them downtown. Lady leaned out the window at me and tailed “Hail victory.” Flying Christian and Trump flags also.

Just so everyone knows, @NCSHP troopers blocked traffic for the KKK so they could have their parade without any problems.

And this was even without them having applied for any parade permits https://t.co/S4Vyz7bTXe