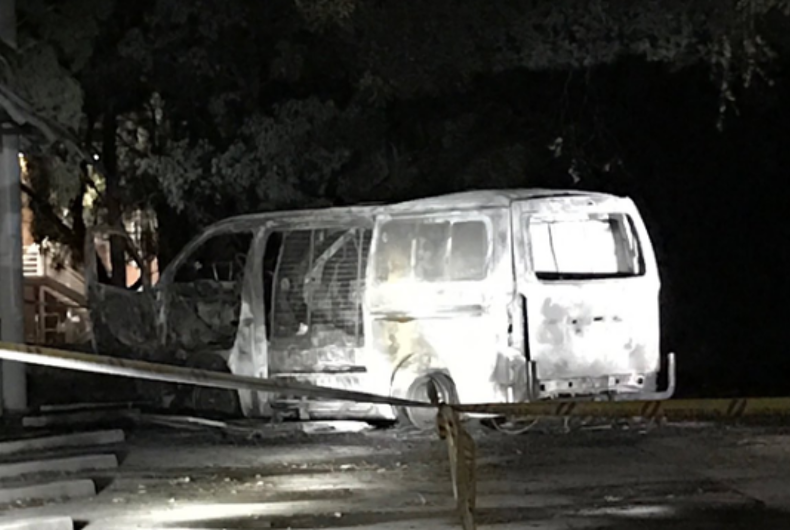 The director of the Australian Christian Lobby believes its offices were targeted by a car bomb because of their activities against same-sex marriage and the Safe Schools program meant to prevent bullying against LGBTQ students.

“I think something of this nature, that appears to be so deliberate, is an attack against the sort of things that we’ve been saying in the public square,” Lyle Shelton told ABC News.

“And obviously someone didn’t like that which we stand for, which we’ve advocated publicly,” he continued.

Police released a statement, which conflicts with Shelton’s claim, saying the motivations behind the action on Wednesday appear to be apolitical.

“Our investigations into this incident are ongoing. And part of these investigations will be to understand the motivation but as a result of our conversations with the male driver of the vehicle, we have established that the actions of this individual are not politically, religiously or ideologically motivated,” ACT Police Officer Commander Mark Walters said.

The driver, a 35-year old man, appears to have set off gas canisters inside the van, causing the explosion. He took himself to Canberra Hospital with serious burns. He remains in critical condition, news.au.com reports.

The windows were blown out of the office. Shelton reported that there were no staff members inside the building at the time.

“We have had the normal trolls on social media and even had death threats sent to our Canberra office over the year but I am very concerned someone would do this,” Shelton told The Daily Telegraph.

“It is a relief the building was unoccupied at the time and we are all very thankful our staff are all safe.”

He is skeptical of the police, he says, though noting he respects the work they do.

“This seems too much of a coincidence [that] this could be solely the motivation of someone who was just acting without any targeted motive,” he told press. “He was pulled from a burning wreck when he gave that statement. He has grievous injuries.”

“Obviously…you don’t just drive around the corner here at 10 o’clock at night, park a van loaded with gas cylinders, then detonate it unless you’re trying to send a message to the ACL,” he said at a press conference at the scene.

“I’m sure it’s a message to intimidate us, to cause us to be silent in the public square, and that’s something we’re not prepared to do.”

The recent suicide of Tyrone Unsworth, a gay 13-year old who had been bullied at school for his sexual orientation, underlines the need for programs such as Safe Schools.

Polls show that most Australians support same-sex marriage. It is expected to be put to a public vote, which the Australian Senate put a stop to in November.

What has straight men panicking right now? Fear of the #SwitchItUpChallenge