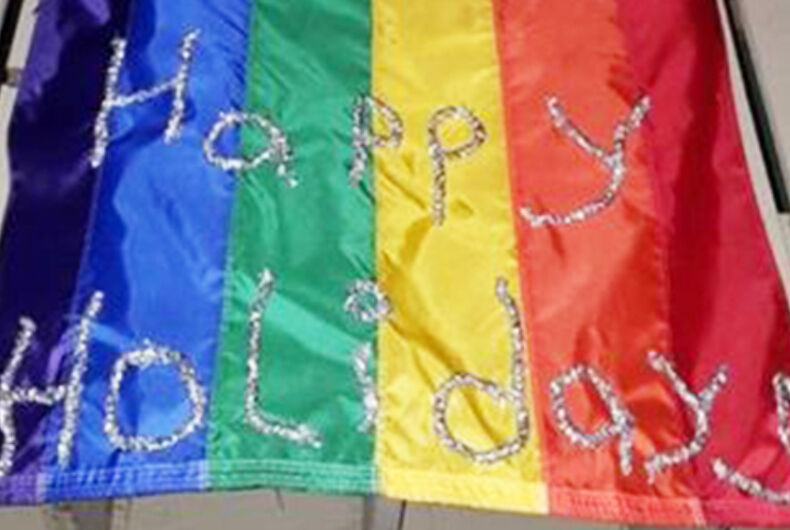 The California woman's pride flag, decorated for the holidays.Photo: Imgur

When a California woman named Holly decided to hang an LGBTQ pride flag from her balcony as a show of support with the community she was told by her landlords that she had to take it down because it violated their decorations policy.

This was an odd argument for them to make considering the number of Christmas decorations currently up on her neighbor’s homes. She realized she was being singled out and refused to quietly comply.

She said she would happily remove the flag if she saw that the policy was being enforced equally. She took to Imgur to share her story, which began to gain attention, attracting the attention of Distractify and George Takei, who shared it on Facebook with his legion of fans.

She decided to send the evidence of the unfair practice of calling out her flag and no one else’s decorations she gathered some evidence and sent an email to her landlords pointing out the disparity.

They went back and forth, seemingly getting nowhere. Holly reports that the front office told her Christmas decorations were okay but gay flags are not.

She was ordered to take the flag down immediately.

She added a “Happy Holidays” to her pride flag to make it more seasonal.

She also put together a fabulous potted plant situation.

And now it appears the negative attention the apartment complex has received since the story went viral.

“We won!” Holly wrote on Imgur. “Everyone’s decorations (mine & neighbors) can stay through Jan 1, when complex will rewrite its decor policy and enforce it equally.”

Congratulations to Holly for refusing to back down and winning out in the end. She reported being motivated to hang the flag after the election, and now more than ever the LGBTQ community needs its allies.

UPDATED: Three gay soccer players in talks with The Football Association about coming out