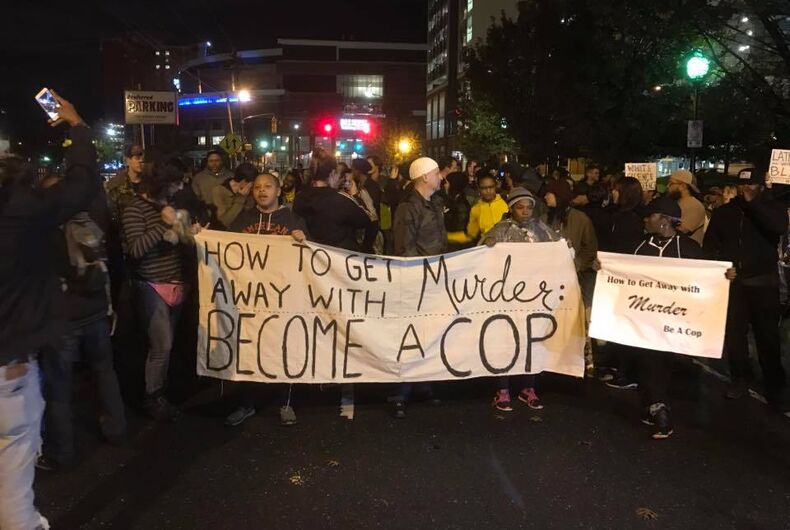 Protesters took to the streets on Wednesday night after the announcement that no charges would be brought against the officer who shot and killed Scott.Photo: Facebook

Protesters took to the streets in Charlotte last night after news that there would be no charges brought against the police officer who shot and killed Keith Lamont Scott.

Mecklenburg District Attorney Andrew Murray announced that he found no legal wrongdoing in the shooting death, saying he was “extremely convinced” that the “use of deadly force was lawful.” Video of that announcement can be found below.

Four demonstrators were arrested, all of them transgender or gender nonconforming, those on the scene confirmed. The Charlotte Observer reports their charges as obstructing traffic, with one receiving an additional charge of disorderly conduct.

“Tonight I saw 4 trans people pulled out of a crowd and arrested,” trans activist and journalist Lara Americo wrote on Facebook. “One of them after being hit with a bicycle. It’s obvious that they were targeted by CMPD since they were core members of Charlotte Uprising. Jail is a scary place for transgender people.”

All four have since been released, reports activist Noah Killough, who is friends with those arrested and was witness to some of the arrests.

“I saw two of them but by the time I made it over they were already getting brought into the police ATV, the other two I found out about later in the night,” Killough said.

He also said that two of the four were persons of color, which was confirmed by organizer Ashley Williams.

Killough described all four as known leaders within the Charlotte Uprising movement, which has been organizing demonstrations and teach-ins since Scott’s death. Protesters have claimed the police are targeting organizers in an attempt to weaken the movement. Dozens of arrests have been made since the start of the protests.

The Scott shooting occurred on Sept. 20, instantly sparked outrage and demonstrations in the streets, as well as questions as to whether or not he was armed, as police claim.

The demonstrations turned to rioting during the first two nights, resulting in Gov. McCrory calling in the National Guard, since pulled.

It is unclear from police dash and body cam footage whether or not Scott, 43, was holding a gun as police claim, but they did recover one from the scene which they say Scott purchased illegally. A man has confessed to selling Scott the weapon, saying Scott told him he was having problems with his wife’s family, in particular his nephew.

Protesters are also demanding answers in the death of Justin Carr, 26, who was shot in the head and killed while at the demonstrations. Rayquan Borum, 21, has been charged, having confessed to the crime, but many say police killed him and are asking for any footage from security cameras that may have caught the shooting be released.

Some also feel that a white police officer, not Brentley Vinson, who is African-American, was responsible for killing Scott.

Police tactics in dealing with demonstrators has also been controversial, with their use of less-lethal weapons seen by many as escalating the situation into one of violence. Officers have also been documented not wearing their nameplates or identifying themselves by bad numbers when asked, which appears to be in violation of Charlotte-Mecklenburg police policy.

The issue of inmates in relation to House Bill 2 (HB2), the anti-LGBTQ law McCrory signed, came up during the gubernatorial debates, with McCrory claiming that trans and gender nonconforming people are separated out. The situation is not that simple, however.

Trans and gender nonconforming prisoners in the state are required to go before a review board, which was introduced in 2014, replacing the former model of housing inmates solely based on genitalia.

McCrory is locked in a tight race to maintain his governorship against Democratic challenger and HB2 opponent Roy Cooper, with a possible recount coming unless Cooper can maintain his lead of 10,000 or more votes.

Watch video of the protests below.

How can we use HIV prevention techniques to lower smoking rates?