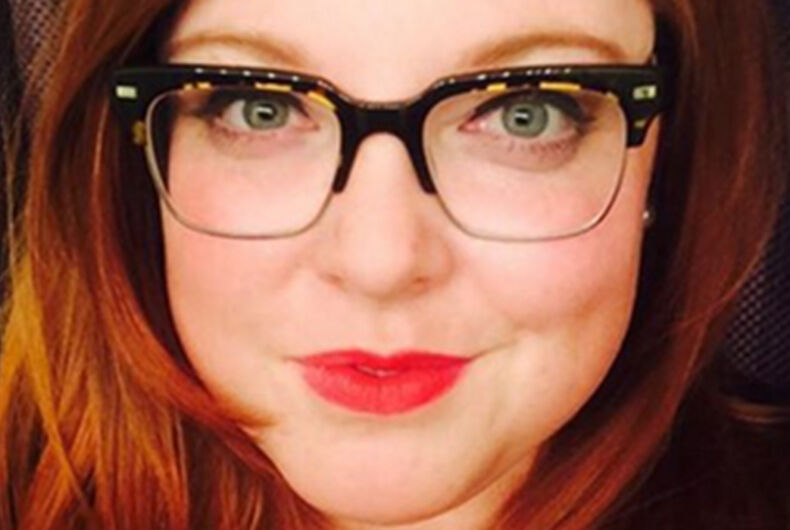 When a Texas woman heard a family a table over at a restaurant near her home talking about their “disgust” with their “liberal” nephew for coming out as gay, she decided to surprise them by paying for their meal.

Not because she approved of their antigay sentiments, but rather because she was inspired by the now famous words of Michelle Obama at the 2016 Democratic National Convention: “When they go low, we go high.”

Natalie Woods was at Snuffer’s Restaurant & Bar, in Addison, Texas on Nov. 11, when the incident occurred, works with an LGBTQ civil rights organization in Denton after a stint with the Human Rights Campaign, the Dallas News reports.

Woods wrote a message on their receipt so they would know why she had made the gesture.

“Happy Holidays from the very gay, very liberal table sitting next to you. Jesus made me this way,” she wrote, signing off with a heart and a p.s. reading, “Be accepting of your family.”

You know that “Happy Holidays” alone probably rankled them.

Woods shared a picture of the receipt with her message written across it and it quickly began to go viral.

She told The Huffington Post that experiences like this one show that when it comes to LGBTQ rights “that fight is long [from] over.”

“It’s time myself and the people of this country defend each other, defend minorities, defend people of all races and religions,” Woods said. “Sometimes it starts with small acts of love, sometimes it’s protesting in the streets, voting, lobbying, or running for a local office.”

She hopes others will take inspiration from her story and “continue the message of love.”

Attacker tells Fla. man: ‘My new president said we can kill all you f—–s now’

Jon Stewart says Trump is a repudiation of Republicans, but they will benefit