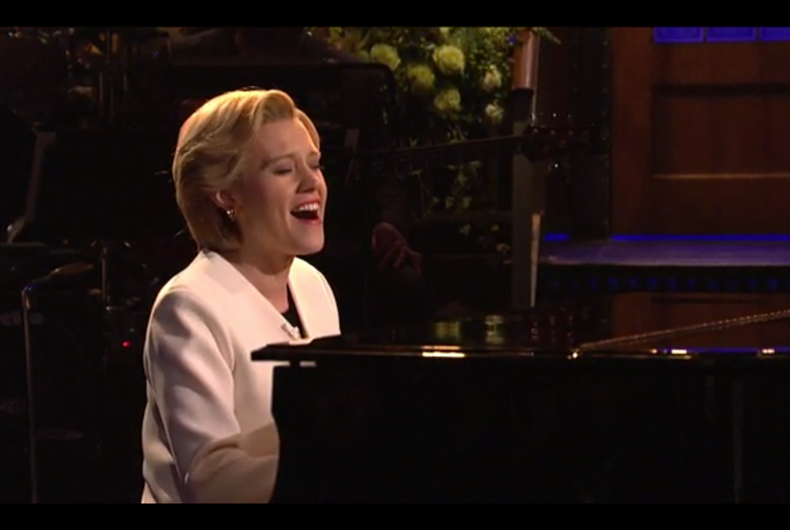 When you’re living in the bizarro land that is America after the Trump victory, it seems fitting that the opening sketch on comedy show “Saturday Night Live” brings tears.

Instead of tapping Alec Baldwin’s impressive Trump impression for comedic relief, SNL offered a sparse and touching tribute to a defeated Hillary Clinton — and the recently deceased singer-songwriter Leonard Cohen.

Dressed in a white pant suit, McKinnon sat down at a piano and sang a heartfelt rendition of Cohen’s iconic — and remarkably fitting — “Hallelujah.” The two verses below, in particular, seem to speak to the struggles of her campaign.

Baby, I’ve been here before
I’ve seen this room and I’ve walked this floor (you know)
I used to live alone before I knew ya
And I’ve seen your flag on the marble arch
And love is not a victory march
It’s a cold and it’s a broken Hallelujah

I did my best, it wasn’t much
I couldn’t feel, so I tried to touch
I’ve told the truth, I didn’t come to fool you
And even though
It all went wrong
I’ll stand before the Lord of Song
With nothing on my tongue but Hallelujah

Watch the video below, and don’t forget the tissues.

More than 200 cases of hate-based harassment reported since election