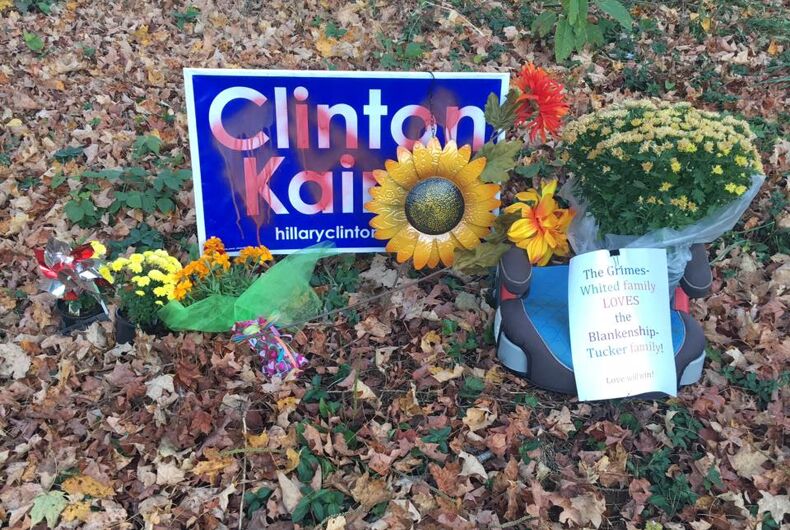 A Virginia lesbian couple who found anti-gay graffiti on their yard sign after election day say the community is fighting back with love.

As reports of anti-LGBT harassment and assault are popping up across the nation, one community is stepping up to show love in the face of hate.

When Rachel Blankenship-Tucker woke up the morning after election day in Virginia, she discovered that the Clinton/Kaine sign in her and her wife’s yard was vandalized with an anti-gay slur.

“I don’t mind somebody calling me a fag — I can handle it — but it was just the action,” she told the Richmond Times-Dispatch. “This is a really peaceful little area and, I don’t know, we’ve just not ever really been treated like that before.”

But instead of removing the sign, Rachel decided to leave it up in the hopes it might spark meaningful conversations.

And her neighbors noticed. Before long, the graffiti covered sign was surrounded by messages of love and support for the couple, including: “Love prevails,” “This family’s love is a gift to our community,” and “Respect & love are more powerful [than] fear & hate.”

They said they hope that the person responsible for the graffiti will see the positive response and have a change of heart. Either way, the community’s support helped the couple get through a difficult week and gave them hope for the future.
“It felt like sort of this personal kindness, like they were saying specifically to us ‘We care about you,’” Rachel’s wife Emily said. “But then after a few days it started to feel like the community was saying we care about ourselves, we care about each other, this is how it’s going to be here.”
News
election, Graffiti, Harassment, Hillary Clinton, Slur, Virginia