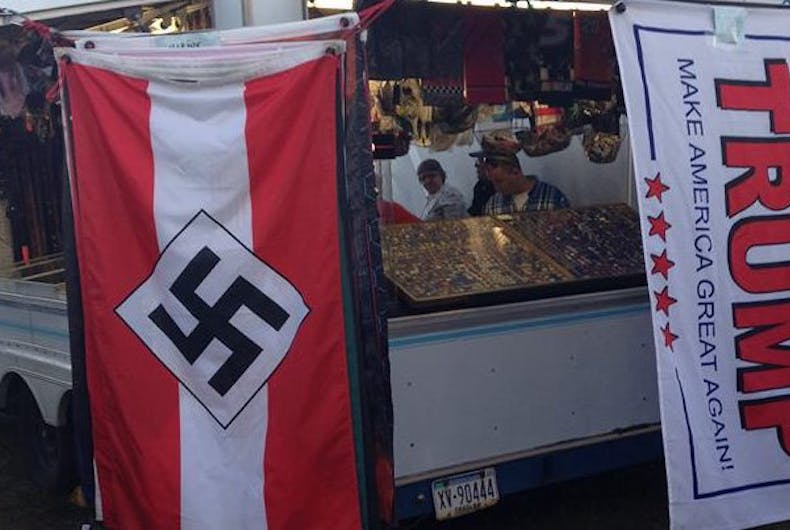 The United States is one of three countries to vote against a United Nations resolution on Thursday calling for the condemnation of the glorification of Nazism.

The U.S. was joined by Ukraine and Palau in voting no on the resolution, entitled “Combating glorification of Nazism, Neo-Nazism and other practices that contribute to fueling contemporary forms of racism, racial discrimination, xenophobia and related intolerance.” It was approved by the U.N.’s human rights committee on Friday with 131 in favor, 3 against with 48 abstentions, the Associated Press reports.

Pro-Trump Nazi graffiti has popped up since he became president-elect. There have also been reports of increased in anti-LGBTQ, xenophobic, and bigoted attacks and harassment, many citing the election of Donald Trump as motivation.

The United States’ objection was on freedom on speech and expression grounds.

“We condemn without reservation all forms of religious and ethnic intolerance or hatred at home and around the world,” said Deputy U.S. Representative to the Economic and Social Council Stefanie Amadeo. “However, due to this resolution’s overly narrow scope and politicized nature, and because it calls for unacceptable limits on the fundamental freedom of expression, the United States cannot support it.”

“This resolution’s recommendations to limit freedom of expression, freedom of association, and the right to peaceful assembly contravene the principles enshrined in the Universal Declaration of Human Rights and must be opposed,” Amadeo added.

Some of Trump’s appointments have drawn concerns due to past anti-LGBTQ, racist, and anti-Semitic statements and leanings. Trump appointed Stephen Bannon, former head of alt-right website Breitbart, a favorite of white supremacists, as his chief strategist. He has also appointed Sen. Jeff Sessions as Attorney General, a man who was considered too racist to become a federal judge.