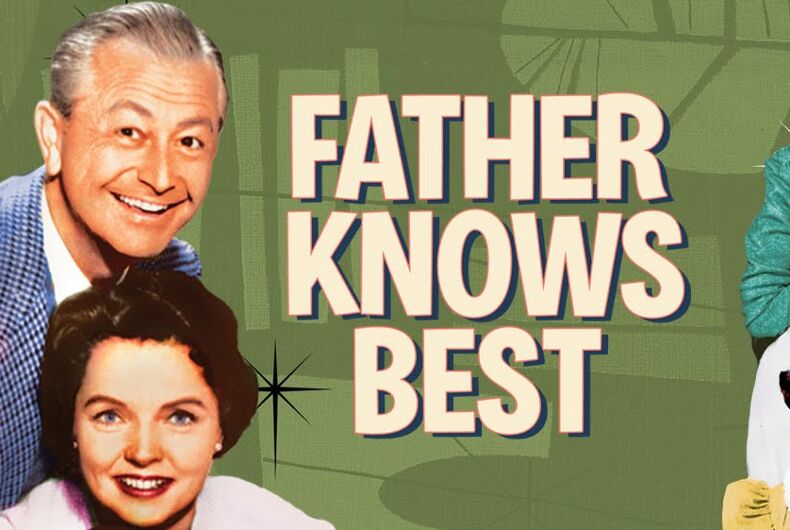 Shannon demands of her mother, “What do you think?”

Eileen’s confident retort: “I don’t have to think. I’m Catholic!”

Though this segment from the movie “The Perfect Family,” directed by Anne Renton, certainly does not represent all Catholics since many do not approve of the Church’s stance against contraception, hostility to the ordination of women, opposition to marriage equality, and issues against women’s reproductive rights, still, this brief dialogue makes a strong point.

Some people relinquish their autonomy and critical thinking facilities and pledge obedience and allegiance to a powerful leader or social institution. In other words, they surrender their freedom for the promise of social and personal security, which usually includes the suppression of those outside the circle, the “others.”

In Eileen Cleary’s case, the “others” included homosexuals, people who divorced, people who had children “out of wedlock.” She attempted to shelter her senses and cover-up her husband’s alcoholism since that never fit into her imagined perfect life.

In her efforts to promote “the perfect family,” she longed for the myth of the bygone days where her lovely children played in her beautifully landscaped yard within her lily-white neighborhood surrounded by rainbows above and unicorns strolling down the freshly cleansed sidewalks. All and everything was in its place, and it was good.

During the late 1940s, researchers, led by Theodor W. Adorno, studied the historical conditions that paved the way for the rise of fascist regimes in the 1930s, World War II, and the Holocaust. They theorized about individuals who would support the growth of fascism. They suggested that people of a certain personality type, which they labeled the “authoritarian personality,” were most ripe for extremism, in this case, those most susceptible to anti-Jewish prejudice and anti-democratic political beliefs.

After painting a gruesome image of a post-apocalyptic U.S.-America, replete with vicious marauding gangs, gun shots whizzing throughout the inner cities, decrepit crumbling structures and highways, rampant poverty, declining health care systems, imminent terrorist attacks, ruthless criminal-drug-dealing-rapist invaders from our southern border, after inciting violence at his rallies, and fear, stereotyping and scapegoating all Muslims and so-called “illegal aliens,” after promising to punish women who have had and their doctors who have performed abortions, after asserting that he will reestablish the Supreme Court to an ultra-conservative majority, and after promising to reverse both Roe v. Wade and marriage equality, and most importantly, after promising to “Make America Great Again,” Herr das Donald not-so-solemnly proclaimed during his acceptance wandering diatribe at the Republican National Convention, “I am your voice! I alone can fix it. I will restore law and order.”

Trump never asked anything of his supporters other than their loyalty by placing their total faith in him. The authoritarian personalities followed brown-shirted and in lock-step.

Trump promotes his followers to wax nostalgic to the television shows from many of their youth: “Father Knows Best,” “The Donna Reed Show,” “Ozzie and Harriet,” and “Leave it to Beaver,” all reflecting the mainstream popular image of the U.S.-American family as white, middle class, with a nice home in the suburbs, and with all family members accepting their assigned raced and gendered scripts.

Democracy, though, demands an educated electorate. Democracy demands responsibility on the part of the electorate to critically examine their politicians so they can make truly informed decisions. Democracy demands of us all never to relinquish our freedom and authority for some promise of a comfortable security by returning to a fairytale past.

When we relinquish our freedom for security, it gives rise to: “I don’t have to think. I’m a Trump supporter.”

Why do health care costs keep eating up more of your paycheck each year?