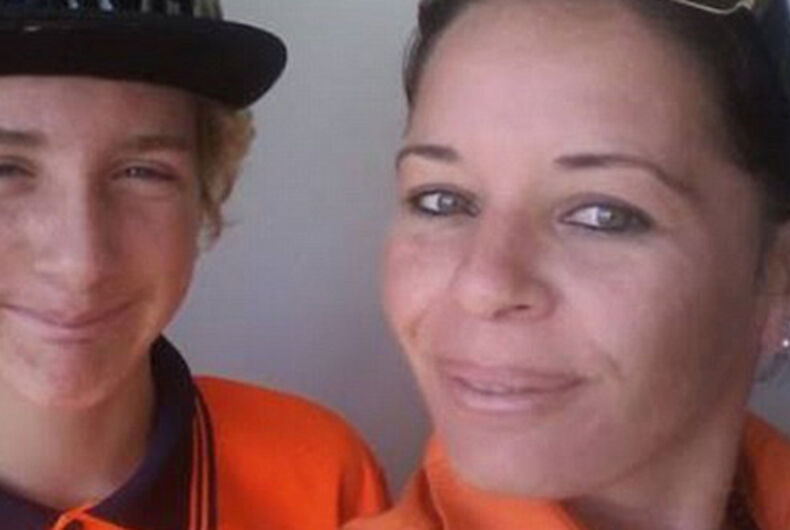 In a sickening turn to an already disturbing and sad story, trolls are targeting the mother of a 13-year old who died as a result of suicide after years of homophobic bullying, setting up fake Facebook profiles pretending to be him.

Australian teen Tyrone Unsworth, who died about a week ago, was bullied at school, and had been recently struck with a fence post in the jaw, leaving injuries that required surgery. The school principal has said they were unaware of the bullying, even though they were aware of the assault with the fence post.

“I know you’re pain-free now son and they can’t pick on you anymore, but this shouldn’t have had to happen,” his mother, Amanda Unsworth, wrote on Facebook.

She is now reporting harassment from fake Facebook profiles pretending to be her dead son.

“You have no bloody right doing this,” Unsworth has posted to Facebook. “Our son is dead and you still want to bully him grow up you pathetic little bastards.”

Authorities are investigating in an attempt to identify those responsible for the harassment.

The Queensland Education and Training Department spokeswoman said it was working with police to monitor “online activity in relation to this issue.”

Condolence messages have also been trolled, such as by one account which had misspelled Unsworth’s last name and commented with laughing emojis.

Unsworth told one troll she had reported him and he responded by insisting he wasn’t afraid and posting a picture of a hand holding a gun, possibly a toy.

At least one of the accounts has been shut down, reports the Daily Mail.

“I extend my sympathies to the family of Tyrone Unsworth and share their outrage that he is being bullied beyond the grave,” LGBTQ rights leader Rodney Croome told the publication. “The continued bullying highlights how deep the hatred of LGBTI people still runs in some parts of Australian society.”

Unsworth, told The Courier Mail last week that the bullying was because of her son’s sexual orientation.

“He was a really feminine male, he loved fashion, he loved make-up and the boys always picked on him, calling him gay-boy, f*ggot, fairy; it was a constant thing from Year 5,” she said.

Politicians, community leaders and Australian celebrities have spoken out about the tragedy, many calling for more support for LGBTQ students.

Since February, there has been a campaign by conservatives against the Safe Schools Coalition, an anti-bullying program meant to help protect LGBTQ youth.

Thousands of dollars from friends and supporters has been raised for Tyrone’s funeral. He will be laid to rest on Thursday.

No decision after Louisiana court battle over nondiscrimination protections